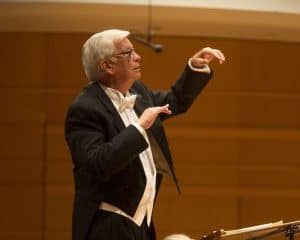 Internationally-acclaimed choral conductor, pedagogue and Delos artist John Alexander has announced his intention to retire from his 44-year tenure at the helm of the renowned 140-voice Pacific Chorale – one of the largest (and finest) choral organizations in the country – at the end of the current season.

There’s no need to recount this great musician’s fascinating career and myriad accomplishments here, when you can read all about it HERE — but allow me to tell you how Delos has helped to bring his consummate artistry to choral music lovers everywhere. A tireless champion of contemporary American composers, Delos has released three remarkable albums of their music – sung to perfection by not only his Pacific Chorale, but by the superb chamber choir drawn from its ranks: the John Alexander Singers. 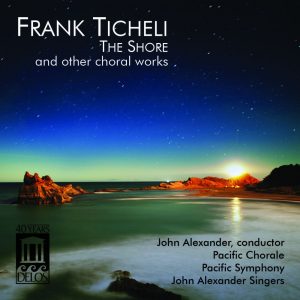 Our initial release featuring his most excellent chorale (also his chamber choir and the Pacific Symphony) presented the complete choral works (as of the album’s release date) of the master American composer Frank Ticheli (DE 3461). The main attraction is his large-scale choral-orchestral piece, The Shore: a work destined for greatness. The works of smaller scale are also well worth the choral world’s attention. 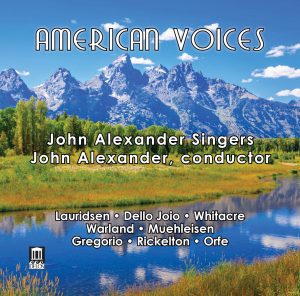 Then came American Voices (DE 3473), in which the vaunted John Alexander Singers offered a delicious program of both accompanied and a cappella masterpieces by such choral superstars as Dale Warland, Morten Lauridsen, Norman Dello Joio and Eric Whitacre (among others).

Most recently, we presented the world premiere recording of The Radio Hour (DE 3484), by America’s best-known living contemporary composer of operas, Jake Heggie. This revolutionary one-act work has the distinction of being the world’s first “choral opera,” with a chamber-sized ensemble drawn from the Pacific Chorale singing the entire Gene Scheer libretto. The album is rounded out by popular shorter works by Heggie.

It’s such a comfort to know that John Alexander isn’t finished with us yet. So then, Maestro: may your “new voyage” be driven by fair winds and take you to safe harbors as you continue to bring great art to a world that – more than ever before – needs the balm of music.