Journey through the 40-for-40: Constantine Orbelian 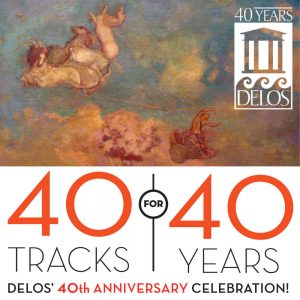 We’re taking a journey through 40 Tracks for 40 Years: Delos’ 40th Anniversary with Delos’ own Lindsay Koob and Carol Rosenberger!

Track 3 presents another Shostakovich work that – like his overture described above – exemplifies the lighter, more upbeat side that characterizes his extensive output for ballet, theater and film. This headlong and happy “Galop”, from the Ballet Suite No. 1, projects a clownish carnival atmosphere through its brief course. This release, Shostakovich Waltzes (DE 3257), demonstrates Delos’ more recent efforts to showcase music by the finest Russian composers and performers: here, the ever-impressive Moscow Chamber Orchestra under the sensitive direction of Constantine Orbelian.

Track 4 follows suit, drawn from Vodka and Caviar (DE 3288): another feast of Russian musical delights. This, too, features Maestro Orbelian – this time, conducting his “other” orchestra, the star-studded Philharmonia of Russia. But this music – Soviet-Armenian composer Aram Khachaturian’s lush and romantic “Adagio” from his Spartacus ballet score – projects more reflective and lyrical qualities, to emotionally devastating effect. The exceptional sound quality of both this and the previous track comes again from the use of Delos’ proven VRR techniques in capturing the warm and spacious acoustics of the Moscow Conservatory’s legendary “Great Hall.”

In the summer of 1998, Amelia and I went to a Chinese restaurant in Los Angeles for a get-acquainted lunch with American pianist/conductor Constantine Orbelian. It may well have been the longest-lasting lunch any of us had ever experienced; and by the time we had come to the first pause in our conversation, we had sketched out an ambitious and exciting recording plan.

Constantine, a San Francisco native, had grown up speaking both English and Russian at home. A few years into his successful career as a concert pianist, he had become the first and only non-Russian ever to be offered the music directorship of a top Russian orchestra. Since that time, he had been touring worldwide with his Moscow Chamber Orchestra, bringing American artists to Russia and Russian artists to America — applauded in both diplomatic and music circles as a cultural ambassador.

The Delos series with Constantine began with two CDs recorded in our favorite LA venue, the First Congregational Church, during the MCO’s 1998 fall tour (Russian Soul, DE 3244 and Mozart Adagios, DE 3243). One of the sessions fell on Thanksgiving Day, so Amelia treated the orchestra members to their first Thanksgiving dinner. Through the years that followed, we recorded major programs with the MCO in California at Skywalker Studio, and in Moscow’s “Great Hall” — there with both the MCO and the Philharmonia of Russia, including recordings with opera stars such as Dmitri Hvorostovsky and Sondra Radvanovsky.

I think you can tell from the “Galop” how much fun everyone had with the Shostakovich Waltzes CD, but there is also video from those sessions, available on our 40-for-40 Online Page. As for the Spartacus “Adagio” from our Vodka and Caviar album, I have never heard anyone sustain the intense build to its passionate musical climax as Constantine does in this performance.