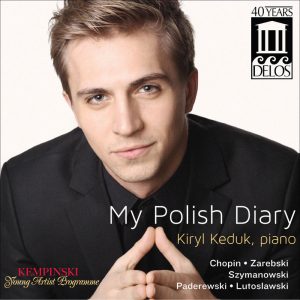 “My Polish Diary” represents the personal musical journey of emerging pianist Kiryl Keduk, recent winner of the 2011 Kempinski Classical
Music Fellowship: a pioneering Swiss arts support program instituted in 2009 by Kempinski Hoteliers. Keduk — a 25-year-old native of Grodno, Belarus — was raised in a richly musical and multinational atmosphere. His mother is a Belarussian conductor, and his father — originally from Poland — was also a musician. His exceptional talent was recognized early on, prompting his teacher to recommend him — at the age of ten — for enrollment at the Minsk Conservatory. Two years later, he won a competition in Poland, where he met his future teacher Waldemar Wojtal. When Kiryl was thirteen, his father moved with him to Poland, where he became Wojtal’s student at the Gdansk Academy for the next seven years — followed by study at the Fryderyk Chopin University of Music in Warsaw.

Keduk has won prizes in fourteen international piano competitions, including events in Minsk, Bucharest, and Varna. In 2009, he won First Prize in the “Klavierolymp” (Piano Olympiad) in Bad Kissingen, Germany, where he was awarded both the Jury Prize and the Audience Prize for the first time in the competition’s history. Kiryl is particularly proud of this distinction, regarding the audience prize as “…even more important to me, as it reflects an artist’s ability to engage and move his listeners.” In 2010, Kiryl won First Prize at the prestigious Manchester Piano Competition in the UK — followed in 2011 by the Kempinski Fellowship, enabling him to study for a full academic year at the Accademia Pianistica in Imola, Italy under Boris Petruschansky.

Despite his international experience and success in places like England, Japan, Italy, and Germany, there is no doubt in Kiryl’s soul as to where he belongs: he feels deeply rooted in both Belarus and Poland, and sees no conflict in his divided sentiments: “My home in Grodno, Belarus, is perhaps most important to me … I feel ever more attached to my birthplace. Wanting to ‘give back’ a bit, I am trying to start an international Festival in my hometown. Still, I am of half-Polish blood … my father brought me to his Polish homeland when I was just thirteen, and remained with me until I was fifteen. But after that, I was on my own, and Poland soon became my home, too. I learned the language very quickly, and got my advanced education there — all the while soaking up Poland’s unique culture and music.

“With this wonderful opportunity to record my debut CD, ‘My Polish Diary,’ I am returning to my strongest musical roots, as well as to my family history. This program is therefore very close to my heart. My musical choices were not easy, though I wanted the entire program to be works by Polish composers. Also, I wanted to offer something new and different: great music that — compared to well-known masterpieces — is rarely heard or recorded. Yet these selections — for many reasons — are among my personal favorites.”