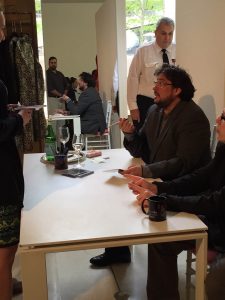 My New York pilgrimage’s remaining missions – while not quite as thrilling – were, in their own way, just as enjoyable. Like when I got to savor an absolutely scrumptious French lunch in the pleasant company of principal Met orchestra flutist Stefan Höskuldsson and his manager Nolan Robertson. Stefan – who hails from Iceland – has just made a marvelous new recording for us, entitled Solitude, of music for solo flute and piano with Irish pianist Michael McHale. It’ll be released in June … just wait ‘til you hear it! I had a ball writing his liner notes. Flute fans, rejoice – as Stefan is one of the very finest flutists of our time.

And then there’s Louise Dubin – my good friend and former principal cello of the Charleston Symphony (I sang for years with their symphonic chorus). She gave me a guided tour of the Juilliard School, where she studied, and we enjoyed a light (but fabulous) all-antipasto Italian supper at Fiorello’s before I stepped back across the street to Lincoln Center to attend Un Ballo.

Louise and I are working together right now on preparing her upcoming Delos album devoted to the near-forgotten music of 19th-century cellist and composer Auguste Franchomme, who was a close friend and musical colleague of Frédéric Chopin. Louise – in addition to being an absolutely fabulous cellist – happens to be one of the world’s leading Franchomme scholars: she’ll soon be publishing a new Dover edition of the composer’s music. And this fascinating and beautiful new CD (done in collaboration with five of her musical friends) – surveys his lovely transcriptions of Chopin’s music as well as his original compositions; it should be out in August or September. Watch for it! 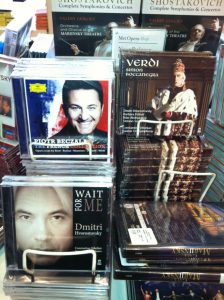 Finally, my journey’s activities ended on Friday with an enjoyable visit to two prominent members of the Metropolitan Opera Gift Shop’s Management team, Marsha Greenberg and Hope van Winkle. After our cordial discussions, I lost no time in getting iPhone snapshots of their special displays of Delos products (Alvarez & Hovorostovsky) – also the poster that I worked on with Marsha online in anticipation of Marcelo’s scheduled CD signing session on May 6 (yesterday), two days before his final Cav/Pag appearance. Also part of that prominent display is another poster promoting our very own Dmitri Hvorostovsky’s recent release, Wait For Me, featuring his supremely nostalgic renderings of beloved WW II Russian wartime songs that will strike a sympathetic chord in the soul of any soldier.

Hats off to the shop and its dedicated staff for their help and hard work in promoting our recordings! Convincing evidence of what we at Delos have been jokingly calling “Delos’s April takeover at the Met.”

Thus ended Lindsay’s latest Big Apple adventure – save for a couple of lovely little restaurants & cafes I discovered on the Upper West Side … also a few musical friends and other interesting NYC denizens whom I called or briefly met with. THANKS for coming along on my happy ride!