Lucy Mauro and Donald George on the Music of Mary McAuliffe 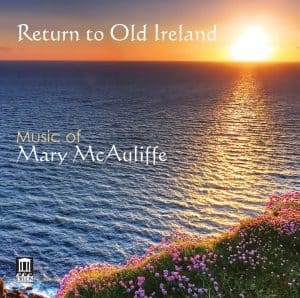 Mary McAuliffe’s music is beautiful, accessible, and clearly from the heart. We’ve put together a broad range of works that show many of the most important characteristics of her style: most notably her ability to enhance texts and her distinctive way of combining the modern and medieval – in often poignant and occasionally whimsical manner – all to great effect and emotional impact. Her portrayal of the immigrant experience is universal, particularly for most Americans, as we don’t have to look far back in our own families for her heartfelt words and music to resonate with us all. —Lucy Mauro

These songs and Leaving: A Famine Victim’s Cry of Desolation were quite personal to me, being of Irish-Sicilian ancestry and knowing both groups had to leave their home islands to come to America. The words and the lilting music of Mary McAuliffe, with her predominantly melancholy mood and folk-inspired rhythms, fit both immigrant groups from opposite corners of Europe, with their Catholic upbringing and love of dance and song. Mary perfectly adapts Yeats’s poems in her wonderful melodies and harmonies, soaring rhapsodically with his imagination and symbolism and creating an affecting symbiosis of words and music. —Donald George