Sorry for the delay in getting my descriptions of Moscow’s mind-boggling Tretyakov State Gallery and Jewish Museum and Center for Tolerance blog-worthy. Both places are of such high quality and vastness of scope that I can do no more than give a sense of why you mustn’t miss either one if you ever make it to the Russian capital.

We trekked to the Tretyakov on a Sunday afternoon decorated by fallen leaves and a light drizzle, to be greeted by a sea of Muscovites standing in line patiently to gain entry. After consuming a chocolate pudding advertised as “hot cocoa” at a nearby café, we eventually got inside the museum, which is unimposing from the outside and features an added-on frontal façade whose design could charitably be called quaint. The museum, in fact, was once the house of its founder and chief patron — Pavel Tretyakov (1832-1898), a textile merchant-turned-banker whose philanthropy extended to war widows, deaf mutes and the unmarried daughters of deceased artists. The combination of Tretyakov’s deep pockets, love of art and abilities as a curator gave the museum a leg up right from the start, and it has only continued to grow in stature in its nearly century-and-a-quarter of existence. It has been state controlled since 1918.

The Tretyakov’s fame rests on its collection of Russian art, which goes back as far as early medieval times. The 20th century works are housed in a separate building known as the State Tretyakov Gallery at Krymsky Val. Said to be very impressive, its span stretches from Kandinsky and Chagall through the era of Socialist Realism and up to the present day. Unfortunately, there was no time.

The art we did see covered the 17th, 18th and 19th centuries, and in the basement there’s a spectacular display of religious icons from the 10th century onward. The latter features numerous depictions of Christ and the Holy Family, most of them stylistically derived from the imported Byzantine model. While not lacking in color and impact, they have a one-dimensional feel that seems to broadcast a message of obedience to an omnipotent and somewhat stern higher power. I’m fortunate enough to be acquainted with Andrei Tarkovsky’s epochal 1966 film “Andrei Rublev,” based on the life of Russia’s best-known and most celebrated painter of frescoes and icons, so I was excited to compare his mostly 15th century work with that of his predecessors. Sure enough, there’s a big difference; Rublev’s figures are, put simply, more human. Their faces are gentle, calm and enigmatic; yes, solemn too, but never overbearing. What a treat.

Back upstairs, it took quite some time to wade through the period up until the middle of the 19th century. Portraits, portraits and more portraits of wealthy noblemen and their wives – the only people who had a use for painting in those days. They’re pretty darned boring. There are diversions from time to time in the form of Italian landscapes – always Italian, as if no other European lands existed. Italy, where it’s always sunny, sleet and snow never fall from the skies, and the wind blows from the warm Mediterranean instead of the frigid steppes. We get it.

Thankfully, realism eventually surfaces in the mid 19th century. It is manifested in two ways – historical paintings — depicting varying eras — that admit battlefield carnage and the suffering of innocents, and, much less common, depictions of peasants and the mostly wretched lives they were leading. The two most haunting paintings I saw I am not able to name, as they are not included in the Tretyakov’s online component. One shows a priest offering a blessing for an entire field of war dead, lying face up, their bodies obscured by drifting snow and on their way toward being as one with the earth. The other painting shows a group of three exhausted peasant children dragging through the snow a heavy sled on which equipment or supplies have been piled. Their pained faces tell the whole story; this – and nothing more comforting – awaits them in life.

There are dozens and dozens of similar excellent paintings awaiting investigation if the visitor has the energy. One of the most striking is Ilya Repin’s famous “Ivan the Terrible and his son Ivan,” an 1885 work in which the bloody 16th century czar cradles the head of his son, whom he has fatally bludgeoned during a quarrel. I don’t know enough about the individual artists of the period to drop names. But I will hazard that by their choices of subject matter they collectively played a key if subtle role in laying the groundwork among Russia’s intelligentsia for the overthrow of the monarchy a few decades later.

The impact of these works cannot be underestimated. The Tretyakov is worth a visit for them alone. 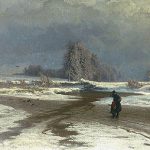 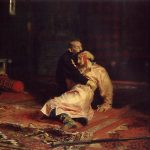 The next day, a Monday, is a day when many museums aren’t open. But the barely one-year-old Jewish Museum and Center for Tolerance was, so off we went, having been alerted in advance that it was a spellbinding experience.

Our tipster, Mila, wasn’t exaggerating. Here, under one roof in a specially built structure that was once an auto bus garage, is a state-of-the-art presentation of the Jewish experience in Russia. This is a vast subject fraught with multi-leveled complexity and nuance; many centuries of sacrifice and the bloodiest of persecutions; political, cultural and economic dimensions more familiar to historians these days than to many Jews – anywhere in the world.

I never imagined that the universe of material pertinent to the theme would be curated in such a thorough and evenhanded manner – especially in Russia, where anti-Semitism has never really been eradicated and the long-ruling Communist Party thought nothing of twisting its own utopian rhetoric to demonize Jews whenever it was deemed politically expedient. But this amazing museum tells it like it is — and was — as much as any such facility I’ve ever been in.
There are some solid reasons why it has appeared on the Russian scene. Some of the people behind the venture and the support it receives from President Vladimir Putin are detailed in this excellent article by the New York Times’ Ellen Barry.

The Jewish Museum features numerous interactive experiences, starting with a 3D representation of the Jewish concept of how the world began. Your seat will be rocked and rolled and you’ll be splashed by some drops of rain along the journey – an amusing prelude to the sober exhibits to come. There is a lifelike depiction of a shtetl, the type of hamlet or neighborhood where most Russian and Eastern European Jews lived before the 20th century’s waves of emigration and genocidal catastrophes. There are program materials, exhibits, films and photographs of the places where Jews worked, lived and amused themselves – a world that has vanished from our view.
To my mind, some of the museum’s most outstanding features are:

Well, I’ve gone on far too long. This museum is educational and inspirational – and perhaps a harbinger of the day when Russia’s remaining Jews will be thought of by their countrymen as simply “Russians.” 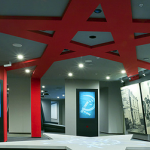 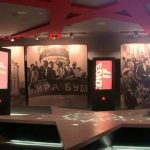 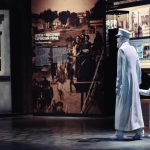