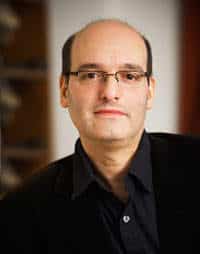 Noted for his highly poetic and lyrical compositions, Philip Lasser has crafted a unique sound world, blending the subtle colors of French Impressionist sonorities with the crisp, direct sounds and rhythms of America’s jaunty musical palette. Standing apart from modernist trends and experiments, he seeks to achieve refinement of personal expression via economy of gesture and a blossoming of color.

Born in New York City in 1963, Lasser began piano lessons and composing at the age of 5. At 16 he entered Nadia Boulanger’s famed Ecole d’Arts Americaines in Fontainebleau, France, where he also met and began working with the legendary pianist Gaby Casadesus. After graduating summa cum laude from Harvard College, Lasser worked with Narcis Bonet, Boulanger’s closest colleague and disciple in Paris, where he lived from 1985 to 1988. He then studied counterpoint with Jacques-Louis Monod at Columbia University, where he forged a seamless link between the French world of musical color and the great German tradition of linear contrapuntal development. Two years later, Lasser entered the DMA program at The Juilliard School, studying with David Diamond.

Philip Lasser’s music has been performed by many distinguished artists, and recorded by many different labels. His recent book, The Spiraling Tapestry: An Inquiry
into the Contrapuntal Fabric of Music, offers a pioneering view of Bach’s compositional world. He directs the European American Musical Alliance Summer Music Programs in Paris, a school dedicated to training young composers, chamber musicians and conductors in the tradition of legendary teacher Nadia Boulanger. Lasser has been a distinguished member of the faculty of The Juilliard School since 1994.