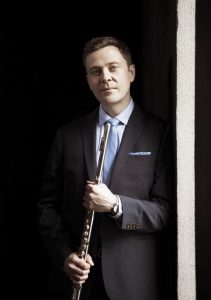 Stefán Ragnar Höskuldsson is the principal flutist of the Metropolitan Opera Orchestra, as well as a distinguished international soloist and chamber musician. A native of Iceland, Stefán has been praised by the New York Times for his agility and warmth of expression.

Mr. Höskuldsson has performed widely throughout the United States, Europe, and Japan under the skilled direction of James Levine, Fabio Luisi, Valery Gergiev, Daniel Barenboim, Seiji Ozawa, Esa-Pekka Salonen, and Riccardo Muti. He regularly performs at Carnegie Hall with the Met Orchestra and Chamber Ensemble and in 2009 he was featured as a soloist in Pierre Boulez’s Mémoriale-Explosant Fixe. Stefán has collaborated on performances and recordings with such artists as renowned pianists Evgeni Kissin, Alfred Brendel and Yefim Brofman, violinist Gil Shaham, and sopranos Diana Damrau and Anna Netrebko. As a member of the Metropolitan Opera Orchestra, Mr. Hoskuldsson has received two Grammy Awards in the category of best opera recording for Wagner´s Ring Cycle and Thomas Ades’ The Tempest.

In addition to his performances with the Met, Stefán has been invited as guest principal flute with the Los Angeles Philharmonic, the Mostly Mozart Festival and the Chicago Symphony Orchestra. His extensive solo performances include engagements with the Pacific Music Festival in Sapporo, recitals at the Sir James Galway International Flute Festival in Lucerne and a live radio broadcast with BBC Radio 3 In Tune in London.

Stefán currently teaches at a private studio in New York City and has been a faculty member with the Pacific Music Festival in Japan since 2010. He has given master classes at The Juilliard School, Manhattan School of Music, Mannes College of Music, Guildhall School of Music and Drama, and the Royal Academy of Music.

Stefán can be heard and seen on live HD broadcasts with the Metropolitan Opera. He has recorded for Castle Classics, the Naxos label-American Classics Series, and now for Delos.

Buy on Amazon Stream on Spotify