More Favorable Press for Jenni Olson’s The Dreams of Birds 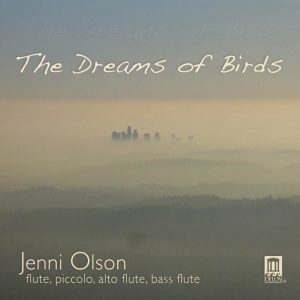 Matt Weber of the I Care if You Listen website recently posted an insightful review of flutist Jenni Olson’s remarkable recent album, The Dreams of Birds.

The review title, Dreaming High and Low, reflects one of this album’s unique purposes, further explained by Weber: “The goal of Jenni Olson’s new album, Dreams of Birds, is to utilize the ‘full array of tone colors’ that the different members of the flute family can produce.” He goes on to explore the album’s world premiere recordings of the nine different chamber music selections offered – each written specifically for Olson by a different composer (and friend) – while analyzing the varied sounds and effects of the piccolo, standard flute, alto flute and even the (rarely heard) bass flute and how they interact with other instruments.

While Weber enjoyed some of the pieces more than others, he comments that all of them are very accessible, adding that “The decision to incorporate music written by her friends lends the pieces a very intimate, familiar aspect.” Citing some “…truly transcendent moments” among the various works, he was “…particularly moved by the harmonies and dialogue between Olson’s flute(s) and Christin Webb’s bassoon(s) on (Dave) Volpe’s Riverbed and Bear McCreary’s Incantation.” He also spoke very highly of Joachim Horsley’s Moonrise, declaring, “This piece stands out on the album as the one that bears the most fruit upon repeated listens.”

Weber had nothing but praise for Jenni’s (and her colleagues’) playing, describing it as “…warm, rich, and evocative, with every note a question, suggestion, or innuendo in an ongoing conversation. The other players who join Olson are equally musically expressive …” In conclusion, Weber advises that several of the works were “not only enjoyable, but met their goal of helping the listener to hear the flute family in a new way.”

So, if you’ve never heard a single recording that showcases all four instruments of the flute family, take Mr. Weber’s word for it that you’re in for a pleasantly ear-opening experience.

Posted by Lindsay Koob on
Share:
Categories : Delos Reviews
Tags : I Care If You Listen, Jenni Olson, review, The Dreams of Birds
← Next Post
Previous Post →