Mortality Mansions: “When I Was Young” 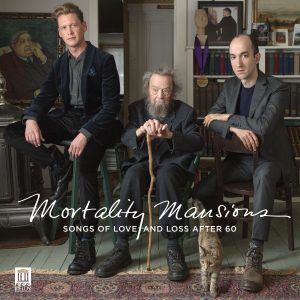 With the second piece of Mortality Mansions, “When I Was Young”, the song cycle shifts into the present tense and dives into the themes of ardor and eros, commitment and loss, in its aging characters. “When I was young and sexual/I looked forward to a cool Olympian age/for release from my obsessions,” Slattery sings with the plaintive clarity that distinguishes him as one of the most artfully communicative singers of contemporary concert music. “At sixty,” he continues, “the body’s one desire/sustains my pulse, not to mention/my groin…

Let us pull back the blanket,
slide off our bluejeans,
assume familiar positions,
and celebrate lust in Mortality Mansions.

Garfein had been toying with various titles for the cycle until, after he had several of the songs finished, he woke up one night with the final words of “When I Was Young” echoing in his head. “ ‘Mortality Mansions’ – that captures it all, the whole essence of the piece,” says Garfein. “It’s about sex and romance and bereavement, the joy in living day to day with someone you are entwined with in the deepest ways – emotionally, intellectually, and physically – knowing, all the while, that death could be around the corner and will, finally, come. The image of that final phrase from ‘When I Was Young’ suggests both grandeur and a sense of inevitable decline. Knowing that the decline is inevitable and, in some ways, already here, only enhances the intensity of the moment and the importance of enjoying it.”

Get it NOW on Apple Music