In response to recent commentary about “Mozart TV,” here is further information about the album, along with musical samples. 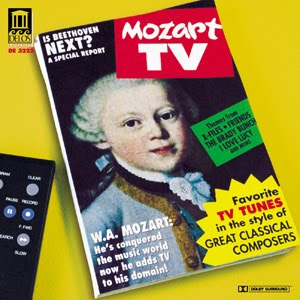 “One of my all-time-favourite CDs. So clever, so bright and so well done! Vivaldi does Friends, Mozart does Hill Street Blues, Debussy does Bewitched, Handel ponders the “think music” from Jeopardy. Actually, composer-conductor Donald Fraser does it all. The man’s a genius with a solid sense of humour.” Air Canada

“Delightful. Perfect for introducing even reluctant classical listeners to the special attributes of the genre…” Reviewer’s Bookwatch

“amusing, musically enlightening, and much easier on the ears than MTV.” Parent Council

“Delos is becoming one of my favorite labels for kids’ music because of their imaginative presentation of classical music.” Metro Kids

“What’s the best part of watching TV? The laughs? The drama? The commercials? Nope, nope and no way! It’s the music! Listen to this: Mozart TV. We’ve heard that “Friends” song about 5 trillion times, and it’s never sounded like this! All these TV tunes are recorded in the styles of classical composers.” Disney Adventures

We all had fun with “Mozart TV,” tipping our hats to TV classics in the musical styles of a variety of classical composers. This was our third such album, and we were on a roll after the success of Donald Fraser’s sophisticated classical sound-alikes in “Heigh-Ho! Mozart” (DE 3186) and “Bibbidi Bobbidi Bach” (DE 3195).

Harry Pack wrote in the notes:

“Let’s pretend TV as we know it had existed at the time of Mozart. Wouldn’t it have been the most natural thing in the world for Wolfgang Amadeus to compose music to introduce TV comedies and dramas? Wouldn’t the TV moguls of the rococo age have loved the prodigiously gifted and fast-working Mozart, a genius who could whip up memorable melodies and entire compositions in an incredibly short time?

“Since Mozart was chronically short of money, he probably would have overworked himself to the point of exhaustion. Mozart themes would dominate the airwaves. This entire album would be devoted to Mozart… the music master of the tube.

“However… as the history of music has evolved quite differently, we are offering the next best thing. Some of the most memorable themes associated with the great TV shows and series of the past 30 years have been recreated, with the help of Donald Fraser, into stylish compositions as loving tributes, not only to Mozart, but to many other great classical composers.”

Arranger Donald Fraser says: “This album, for me, is not solely paying ‘homage’ to the composers whose styles I have evoked but, equally important, it was written with the greatest admiration for the composers of the themes themselves. Some of these themes have been around for a lifetime and look set to be heard for generations to come — in that respect they have become ‘classics’ in their own right.”

To go along with the musical samples, here are some quotes from a discussion with Donald after the recording sessions:

Friends: “It’s a day in the life of Vivaldi… it’s about the different moods you have with friends… If you look at the relationships in that series, it’s all about that… and about different moods, such as Vivaldi creates in The Four Seasons. And that’s what I tried to do… create different moods to represent friends…”

“Star Trek: Voyager was a challenge because it’s a Jerry Goldsmith theme. The melody has a Straussian contour… there’s a futuristic feel about it, like 2001: A Space Odyssey. It’s a French horn in the original, so my arrangement is as much an homage to that instrument as anything. I just thought, let’s show the audience what the French horn can do with exactly the same tune. And then, of course it has a counterpoint in the second half when I give the tune to the cello and the violin.”