Bonus tracks — the only recordings ever conducted by Sousa himself with the Sousa Band: John Philip Sousa Speaks [Broadcast, 1929] • The Stars and Stripes Forever [Broadcast, 1929] • Nobles of the Mystic Shrine • Dauntless Battalion • Sabre and Spurs • Solid Men to the Front • Liberty Loan • The U.S. Field Artillery March
[DE 3102]

“brings us as close to the real effect of Sousa’s band as we are probably ever to get… a most important disc for anyone with a love of this music and a desire to hear how it ought to be made to sound.” —Fanfare

As Sousa biographer Paul Bierley tells us in the album notes, “John Philip Sousa was a missionary for his beloved country.” (see excerpt below) 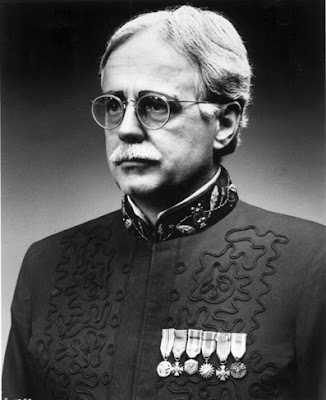 When Delos founder Amelia Haygood got together with our modern-day “Mr. Sousa,” Keith Brion, this recording was a natural. Keith had become famous as a virtual reincarnation of the great bandmaster and American patriot. Steeped in the music and style of Sousa’s music, Keith had created the New Sousa Band, following as closely as possible the configuration of the original Sousa Band. On his tours with the Band, Keith would do a remarkable impersonation of Sousa, bringing “Mr. Sousa” to his audiences as both a theatrical and musical experience. Keith was enthusiastic about including some historic recordings of Sousa himself conducting the original Sousa Band, in what was to become one of the favorite Delos Evergreens.

American Record Guide described it this way: “The precision, rhythmic integrity, intonation, and tone qualities of the players are first-rate. Especially praiseworthy is the constant creation of interesting dynamic shapes and structures. Balance and clarity are superb, allowing even the least significant parts to be heard. … This recording includes 42 minutes of marches by the band, plus a special treat: 23 minutes of historical recordings of Sousa’s own band. Despite the loudness of the needle scraping across the cylinder, the sound is clear and offers a rare chance to hear what these marches sounded like when 40 players crowded in front of a huge recording horn in the years 1917-1923, Another bonus is the introduction by Sousa himself, recorded in a 1929 radio broadcast.”

At the beginning of Sousa’s introduction, he says “Thank you, Mr. Taylor.” This is American composer Deems Taylor, who not only wrote beautiful and important works, but promoted other American composers. (For an example of his music, see John Eargle’s “Engineer’s Choice” CD DE 3506.)

Keith went on to make subsequent recordings for us, one of Percy Grainger’s music for Symphonic Band, entitled “To the Fore” [DE 3101]; and an album of Hovhaness symphonic band music entitled “Star Dawn” [DE 3158], which includes the Trombone Concerto featuring the remarkable Christian Lindberg. In his introduction to this album Keith wrote:

“While there will never be another “Sousa and his Band,” this recording is an homage to both Sousa (1854-1932) and his renowned band (1892-1932). The spirit and letter of the original are framed in the perspective of modern musicians, modern instruments and modern recording techniques. Our efforts are infused, informed and inspired by Sousa’s original band. The musical speech of the 1920’s inﬂects the technique and style of the 90’s.

“The band uses Sousa’s original seating plan. While original instruments are not used throughout, attention has been given to the selection of modern equipment most closely approximating the sound of the original cornets, trombones and percussion. The saxophone section, all members of the Manhattan Saxophone Ensemble, use the mouthpieces and the tonal conception of the 1920’s.”

Sousa’s biographer Paul E. Bierley wrote the extensive notes for this album. His title for the fascinating Sousa essay is “Salesman of Americanism.” Here is a short excerpt:

“John Philip Sousa was a missionary… a missionary for his beloved country. He was born ‘in the shadow of the capitol dome,’ as he put it… At every opportunity, he extolled the virtues of the United States of America and the principles upon which it was founded. In his field this was difficult. In the mid-nineteenth century, Europeans considered all of America a cultural void… He wished with all his heart that he could someday create music which would help correct the situation. Six decades later, he had done so… Sousa’s music actually tells the story of America. Since most people picture Sousa as a military man, they are surprised to learn that relatively few of his titles are military in nature.”