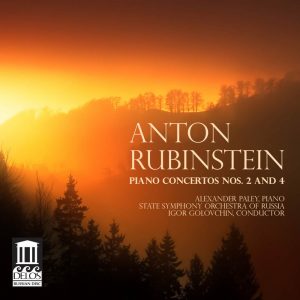 All the more reason to warmly welcome this Delos re-release of Russian Disc’s classic recording of Rubinstein’s second and fourth concertos, as performed by distinguished, Russian-trained artists. Brilliant Moldovian-American pianist Alexander Paley and conductor Igor Golovchin’s Russian State Symphony Orchestra (RSSO) have joined forces to produce glittering and idiomatically true accounts of both works. This is the third in Delos’ current series of Russian Disk re-releases of Rubinstein’s music; the other two are performances of Rubinstein’s “Ocean” (DRD 2010) and “Dramatic” (DRD 2012) symphonies, also by Golovchin and the RSSO.