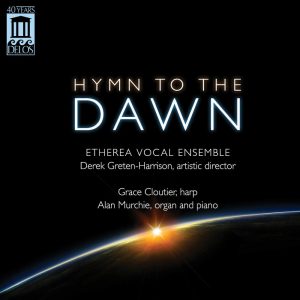 Hymn To The Dawn

“Throughout the recording (Ceremony of Carols – DE 3422) the style is impeccable and the intonation flawless. One is immediately struck by the tone of the group…shimmering. No boy choir could equal this tone.” — Bob Chambers, Choral Journal, August 2012

Following the conspicuous success of Ceremony of Carols, Etherea Vocal Ensemble’s stunning debut album, we at Delos lost no time in producing their second effort: Hymn to the Dawn. Containing several world premiere performances, the CD is an enchanting mix of mostly uncommon works for female choir by Gustav Holst, Amy Beach, Josef Rheinberger, Felix Mendelssohn and Giaochino Rossini; the program includes a cappella pieces and others with harp, organ, or piano accompaniment. While all of these lovely works are standouts among the limited female choir repertoire, Holst’s third group of Choral Hymns from the Rig Veda and the Two Eastern Pictures are particularly rare, exotic, and ripe for rediscovery.