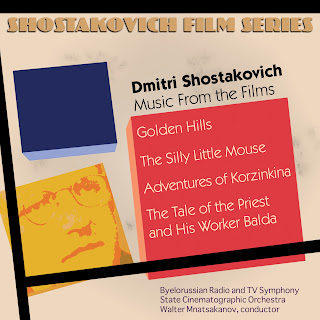 SHOSTAKOVICH FILM SERIES,VOL. 5
DMITRI SHOSTAKOVICH
MUSIC FROM THE FILMS:
Golden Hills
The Silly Little Mouse
Adventures Of Korzinkina
The Tale Of The Priest And His Worker Balda

Among the interesting Delos events in 2010 were the four Shostakovich Film Series re-releases pictured below. These albums were among the most successful of Constantine Orbelian’s Russian Disc (RD) label, which offered many unique and highly prized recordings of Russian repertoire.

Shostakovich Film Series, Vol. 5, originally produced by Orbelian and licensed to Citadel when RD closed its doors, is newly available on Delos as part of the DRD (Delos Russian Disc) series.