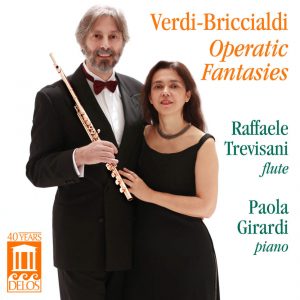 Giuseppi Verdi (1813-1901) was, of course, Italy’s Romantic-era “king of opera,” and leading instrumental masters of his day mined his (and other composers’) operas endlessly, transcribing their most appealing themes and arias into virtuoso showpieces for their own (and others’) use. Such works, as here, often took the form of fantasies based mostly on multiple melodies. These fantasies draw from seven of Verdi’s finest efforts: Il Trovatore, La Traviata, Aida, Ernani, Don Carlo, Macbeth and Rigoletto. All but the Aida fantasy are heard here in world premiere recordings – probably a result of their intimidating technical demands.