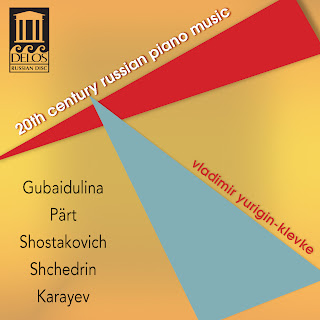 The distinguished Russian pianist Vladimir Yurigin-Klevke offers a striking “highlights” view of some outstanding Russian piano music of the 20th Century. Drawing from his brilliant association with the composers on this CD, he offers a revelatory and highly satisfying journey through this colorful piano repertoire. His generous, in-depth booklet notes add to the experience, as he shares with the listener his views on the music’s artistic context.

Vladimir has been closely associated with Russian piano music of the 20th Century since he first came to public attention in 1969. Then just 20 years old, he won first prize at the National Piano Competition of Contemporary Soviet Music, playing the music of the composers on this album. In the 25 years between his “win” and this recording (originally for the Russian Disc Label and re-released here), Vladimir’s insights into this repertoire continued to ripen in many important performances throughout Russia and abroad.

Beginning the program is Gubaidulina‘s stunning Ciaconna — broad, sweeping, large-scale in character. Pärt’s intriguing neoclassical Partita is an early work, reminding us that it was his piano music that first earned him public renown. The idiomatic Shostakovich Preludes offer delicacy, charm, dance and song. The Shchedrin Preludes and Fugues begin with long, elegant melodic lines, and include a “fantastic tarantella.“ Karayev‘s Preludes draw on the composer’s Azerbaijani folk roots and national colorings, mixing in some lively dances and some free improvisational textures.