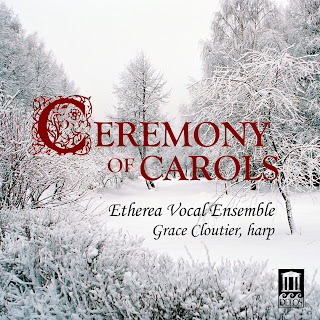 And vocal paradise is just where the sublime singing of Etherea Vocal Ensemble will take their listeners with their new holiday album, Ceremony of Carols. Etherea, founded in 2008, is a unique group consisting of seven distinguished women’s voices plus the alto-range singing of founder/director Derek Greten-Harrison – who happens to be a vocal switch-hitter, performing as both a countertenor and a baritone! Together, they achieve music of rare technical craftsmanship, vocal precision and exquisite nuance – plus stunning purity and sweetness of sound. Add the scintillating harp wizardry of Grace Cloutier and subtle organ support from Alan Murchie. The end result is a sure-fire collection of seasonal classics that listeners won’t want to put away even after their family Christmas trees are taken down.

Framing a central cluster of individual holiday favorites are two beloved carol cycles with harp: Benjamin Britten’s evergreen A Ceremony of Carols and John Rutter’s Dancing Day – both heard here in definitive and enchanting performances. And we guarantee that nobody (except perhaps for those who have experienced Etherea in concert) has ever heard a performance of “Good King Wenceslas” (one of the central songs) like the one heard here, in which director Greten-Harrison sings both as a choral alto and solo baritone!

Buy direct from Delos and Save!