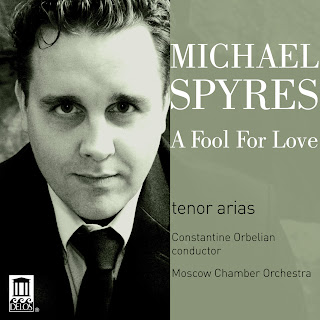 “Michael Spyres has a lovely, liquid tenor, all honey for love duets and some metal for cries of outraged honor.” – John Yohalem, from Opera Today

• Uniquely original collection theme: Use of varied arias to tell a story
• Broad array of periods and styles
• Fresh, young tenor with a brilliant future: one of tomorrow’s likely vocal superstars

You may well be hard-pressed to name a classic opera that lacks a love-story – or a tenor as the main romantic hero. Accordingly, emerging American tenor Michael Spyres has come up with a fresh and fascinating pretext for A Fool for Love: his new collection of tenor arias on Delos.

Michael has carefully selected thirteen mostly well-known arias by composers ranging from Mozart to Stravinsky, encompassing a staggering array of love-related circumstances and emotions. He then sequenced them so as to tell the love-story of a single romantic protagonist. The album’s booklet contains a two-act “plot synopsis,” in which each segment of our hero’s story is indexed to the corresponding aria.

As Michael puts it in his booklet introduction, “What I seek to present to you in this album is a fanciful musical story of a typical war-torn couple, and their struggle to cope with the raptures and ravages of this intangible enigma called love.”

Michael, a Missouri native, completed his studies at the Vienna Conservatory, and is already well-known to European audiences for his critically-acclaimed work in recital, oratorio, and opera. He has appeared at such distinguished houses as Milan’s La Scala and Deutsche Oper Berlin, and worked with conductors like Ricardo Muti and John Eliot Gardner.

Blessed with a supremely versatile instrument, Michael has successfully performed the music of composers from Bach to Wagner, encompassing music of many periods and styles: Baroque, Classical, Bel Canto, and Verismo. He has recorded Rossini’s La Gazzetta, Otello, and Le Siège de Corinthe for Naxos.