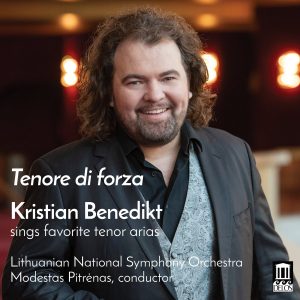 Tenor Kristian Benedikt began his career as a lyric tenor in his native Lithuania, but has since blossomed into one of the opera world’s finest dramatic tenors in challenging roles like Otello. His immensely powerful and dark-hued voice enables him to shine in several of Wagner’s “Heldentenor” roles as well; yet he remains a highly versatile singer who also continues to excel in lyric and spinto roles.In this, Kristian’s debut recording, he proves his wide-ranging artistry in a highly varied program of mostly well-known arias by composers including Verdi, Puccini, Saint-Saëns, Massenet, Tchaikovsky and Wagner (among others). He also treats us to a rarely-heard novelty: an aria from his countryman Vytautas Klova’s Pilėnai—an opera that is practically unknown beyond Lithuania.Kristian is beautifully supported by the Lithuanian National Symphony Orchestra and the Lithuanian National Opera Chorus under the deft baton of conductor Modestas Pitrenas.