The release of New Strings Attached marks the culmination of a long journey. It all started a few years ago when the initial idea for this project was born: initiating the creation of new repertoire for classical and electric guitar by prominent young Israeli composers. This mission captured me, as it promised to be not only relevant for both the Israeli music corpus and the guitar repertoire, but also particularly personal. It seemed to naturally combine two of my deepest interests – performing and initiating the creation of new music on the one hand, and exploring layers of my own cultural roots and identity on the other. I came to believe that in order to bring forth the unique diversity of musical voices emerging from Israel, the guitar with its endless versatility of color, style and texture is the perfectly suited instrument.

I went on to approach and commission an exceptional group comprised of some of the most prominent and interesting composers to emerge from Israel in recent years. I invited them to compose for either classical or electric guitar in different settings, attempting to choose with them the ensemble and format that would best serve their artistic language and vision in conjunction with the guitar. The accumulation of the newly written music that followed has been a moving and surprising process of discovery. Although I aimed for diversity in the first place, I was still amazed by the broadness of the musical spectrum presented in the results – a journey between immensely different musical landscapes. 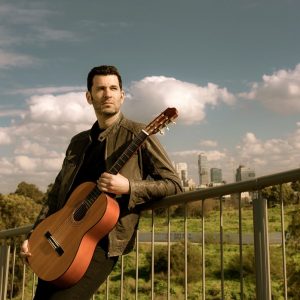 New Strings Attached is a fascinating, ever-changing musical road. I believe it not only reflects exceptional originality while exploring a broad array of sonic possibilities, but also serves as yet another living testimonial to the endless faces of the contemporary guitar.

The album is equally divided between two main centers: one of purely instrumental music, and the other of vocally oriented music. It opens with Gilad Cohen’s The Rushing Camel, brilliantly fusing influences of classical music, ethnic music and progressive rock through a deeply intimate, virtuosic and original take on the very idiom of classical guitar. It moves on to Yair Klartag’s Nothing to express, which creates an abstract sonic landscape, transcending any ethnic or non-musical pretexts while exploring the surprising synergy between electric guitar and string quartet. Jonathan Keren’s Three Ladino Songs illuminate the deep, multi-layered essence of seemingly straightforward folkloric music with the composer’s ever-flowing musical imagination and contrapuntal language. The album turns back to a more abstract mu-sical world in Guy Barash’s TalkBack III, a hectic, energetically charged dialogue between guitar and computer, exploring tensions between spontaneity and control, narrative and commentary, as well as human creativity and technology. It returns to concrete cultural context in Ronnie Reshef ’s crystalline, lyrical and witty art-song settings of Four Bailik Children’s Songs by Israel’s national poet H. N. Bialik. The program ends on a most personal note with my own original piece, the extensive Shomeret Layla. The program notes that follow in the booklet were contributed by the composers themselves.

I was fortunate to be joined in this album by an amazing group of world-renowned collaborators, including violinist Miranda Cuckson, the Mivos String Quartet, Sound artist Guy Barash and three incredible Israeli-born singers, who – with their distinct voices and musical personalities – add fresh dimensions of variety and soulfulness to the music: Rinat Shaham, Tehila Nini-Goldstein and Re’ut Ben-Ze’ev.