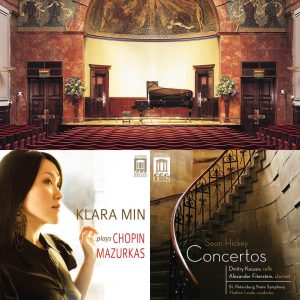 Well, not exactly; but now that we’ve got your attention, please know that the musical wizardry of TWO distinguished Delos recording artists WILL, indeed, soon be heard at Wigmore Hall – like, next week! Rapidly emerging Korean-American pianist Klara Min – whose debut recording for Delos (Chopin Mazurkas – DE 3443) was released just last month – will appear there in recital on April 23. Her enticing program, in addition to works by Schumann and Chopin, will include the UK premiere of Cursive, a piano work by rising contemporary American composer Sean Hickey – whose music (Concertos for Cello and Clarinet) will be released on Delos (DE 3449) in May.

Min’s appearance is definitely noteworthy, as not just anybody gets to play Wigmore. It’s arguably the world’s most prestigious venue for classical music of more intimate genres – like solo instrumental, art song and chamber music – though many associate it primarily with solo piano performance. As Carol Rosenberger, Delos’ own cherished director (and pianist extraordinaire, who appeared at Wigmore three times in the 1970’s) recalls, “London was thought of as the ‘pianist’s Mecca.’ In other words, if you were accepted there, it was a terrific career boost. Wigmore was wonderfully warm in sound and audience welcome; it was a real ‘high’ to play there.”

Actually, quite a few legendary Delos artists have appeared at Wigmore over the years: pianists John Browning and (much more recently) Andrew von Oeyen; singers Arleen Auger (soprano) and Dmitri Hvorostovsky (baritone), and clarinetist David Shifrin – along with the musicians of his Chamber Music Society of Lincoln Center … among many others. But this is definitely the first time Wigmore will witness the music of one Delos artist as performed by another!

So, even if there’s no threat of an imminent Delos takeover at Wigmore, you may still be sure that our wonderful musicians will continue to be heard there frequently – and that’s only one measure of the truly exceptional quality and enduring appeal of Delos’ recording artists.