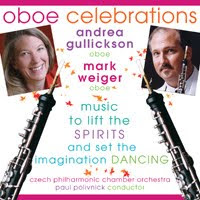 Here is a rave review of our recent album “Oboe Celebrations: Music to lift the spirits and set the imagination dancing” from the Audio Video Club of Atlanta.

Oboists Andrea Gullickson and Mark Weiger, with the assistance of the Czech Philharmonic Chamber Orchestra under Paul Polivinick, show just how much fun classical music making can be in Oboe Celebrations. Subtitled “Music to lift the spirits and set the imagination dancing,” the program consists of Baroque and later 18th century double concertos by familiar composers (Vivaldi, Albinoni) and the lessfamiliar (Fiorillo, Fasch, Garnier), plus George Frideric Handel’s ever popular Entrance of the Queen of Sheba from the oratorio Solomon. It all makes for a satisfying lineup of most delectable music.

Tomasso Albinoni is considered the father of the double concerto, and his Venetian contemporary Antonio Vivaldi was not far behind. The way in which the former spins melodies for the two oboes and wraps them around each other in his Concerto in C Major, Op. 9, No. 9 is matched by the sheer virtuosity of the violinistic writing for the two soloists in the latter’s Concerto in D Minor, RV 535. The Sinfonia Concertante for Two Oboes in F Major by Federigo Fiorillo, a younger contemporary of Haydn, combines Mozartean elegance in the opening Allegro with the sheer zest of its Rondo finale.

The Handel selection, probably the best known showpiece for two oboes from the Baroque era, skillfully intertwines the melody lines of the two instruments together against the fast-moving excitement of the orchestral backdrop.

Johann Friedrich Fasch’s Concerto in D Minor and the Sinfonia Concertante of FrancoisJoseph Garnier are both distinguished for the charm and ingenuity of their writing. In these, as in the other selections on this CD, the rapport of Gullickson and Weiger is much in evidence, complimenting the beautiful silvery tones they cultivate throughout the program.