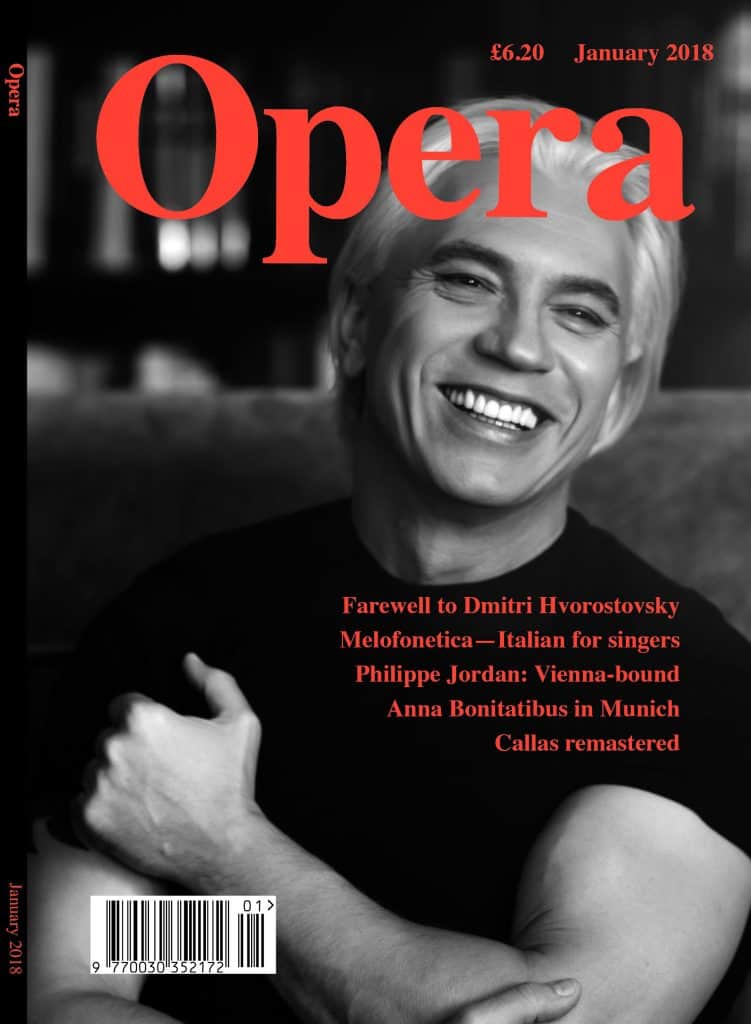 Opera Magazine offered their farewell to Dmitri Hvorostovsky on the cover of their January issue, followed by a wonderful “Dima undimmed” tribute in their February publication, and a March review for his recording of Verdi’s Rigoletto:

“For an opera-lover it was one of those occasions when you always remember where you were at the time. I had missed most of the final of the 1989 Cardiff Singer of the World on television, but switched on just in time to catch a young Russian baritone sweeping on to the stage, looking full of confidence. His programme, ending with Rodrigo’s ‘Per me giunto’ from Don Carlo, was extraordinary. He had everything—the maturity, the nobility of style, and astounding breath control that stretched over two or three phrases, like an arching rainbow of beautiful tone. ‘That’s the winner,’ I remember saying to myself. ‘I don’t care what the others were like.’

“Where did his artistry come from? Hvorostovsky credited his music-loving father, and an early start clearly helped—piano lessons from the age of 11, choral conducting in his teens, formal singing lessons at 16. At the local opera house in Krasnoyarsk there was no lack of opportunity and he had already sung Yeletsky in The Queen of Spades, Silvio in Pagliacci and Giorgio Germont in La traviata by the time he was 23. Yekaterina Yofel, the teacher who set him on his way and (crucially) taught him his amazing breath control, deserves to be world famous. She was ‘like a hypnotist’, he said later. ‘With her, even exercises have feeling.’ Like playing Bach? ‘Yes. Like Glenn Gould playing Bach!’

“Much of his understanding of style he put down to listening to recordings in his early years. He loved Battistini (hurrah!), and the Russian baritone Pavel Lisitsian, so often overlooked in the West, was another favourite. It is easy to see why. Lisitsian’s long-breathed legato, so memorable from those dusty old Melodiya LPs, must have been quite an influence on the young Siberian. During an interview in mid-career Hvorostovsky explained why, saying that Lisitsian was still an idol: ‘He’s 90 years old now, and a friend of mine. He’s a maverick, a voice of Italian beauty, very smooth—you don’t see any stitches.’ Now that we are looking back, we can see Hvorostovsky as Lisitsian’s natural successor.

“His career followed a dignified path. I recall how people worried that the good-looking young star would be pushed into popular dates and crossover recordings, but Hvorostovsky defiantly set his own agenda. That meant following the high road of the great baritone repertoire in the world’s top houses, no cutting of the corners, no dumbing down, no selling his talent cut-price. … So long as there are singers who love their art as much as Hvorostovsky did, opera’s future is bright.”

Read the full tribute on Opera.co.uk

“This studio recording of Verdi’s opera was taped in July 2016, some 16 months before Dmitri Hvorostovsky’s shockingly premature and widely mourned death… Here he continues to demonstrate many of the virtues that sustained his top- ranking career over more than a quarter of a century, in a role that had long been central to his repertoire. His tone is strong and vigorous, with the odd momentary suggestion of effort not unsuited to the part; his interpretation remains a formidable achievement, consistently exploring and using the text to define the jester’s character. ‘Pari siamo’ is a highlight, in which his individualized articulation of Rigoletto’s envious description of his boss—‘giovin, giocondo, sì possente, bello’—and his imitation of him at ‘Fa ch’io rida, buffone!’ all identify the superior artist. … The recording possesses a good sense of perspective, embodying orchestral sound that is rich in colouring…”