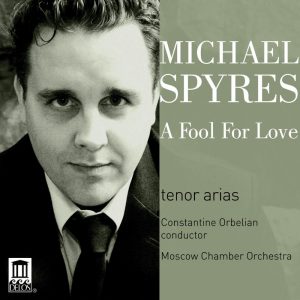 Delos tenor Michael Spyres is about to kick off a slew of concerts at Carnegie Hall, where he’ll appear as both a soloist in Beethoven’s Ninth Symphony and Missa Solemnis (Nov. 16 & 17 with The Monteverdi Choir), and as Orombello in Bellini’s opera Beatrice di Tenda on December 5th. In anticipation of his performance as Orombello, Opera Today sat down with Michael Spyres for an interview; We’ll excerpt some of it here, and you can find the full Michael Spyres: Star Ascendant interview OperaToday.com:

OT: Did you always think you would be a professional singer? If you weren’t a singer what would you be doing?

MS: To be honest I always wanted to be a singer. I have done many other things in my life such as teaching, waiter, construction worker, gardener, but I always considered myself a singer even in the 5 years that I did no singing at all on stage. My other passion in life has always been comedy and I also wanted to be a stand up comedian. Now if I was not singing I would more than likely be a construction worker and have my own building crew. I love physical work.

OT: You have a varied repertoire, with a good deal of Rossini and Mozart. Do you have any role models for singing in this style?

MS: My biggest influence in the Rossini repertoire is Raul Gimenez. His elegance and style are something to behold. Very few people have become the artist that he is. Every intention is heard and you hear how intelligently crafted each phrase is. For Mozart it is of course Fritz Wunderlich. He understood and felt Mozart as no one else has. His handling of his instrument had such grace and dignity that few others have even come close to his understanding of the voice.

OT: Like many other exciting American singers, you seem to be working most of the time in Europe. What’s up with that? There seem to be numerous stateside companies. Are they not asking? Or just not interested in American names? Not doing repertoire that interests you or that you are currently performing? Is there possibly a snob factor at work in American houses’ hiring?

MS: I am starting to sing in the United States but to be honest the U.S. and the E.U. are two different operatic worlds. I have been living mostly in Europe for eight years now and it just takes time to start making the connections back home. Just like in any business it is who you know and who they know. I did not attend any of the prominent schools in the United States and I was only involved in one young artist program which was Opera Theatre Saint Louis. I think this is a very big part of why I haven’t sung much in the United States to date but that is changing.

I am very excited to be singing my first Bellini role as Orombello in Beatrice di Tenda with the ASO and the Collegiate Chorale at Carnegie Hall on 5 December. I have been very fortunate to have sung many Bel Canto roles thus far but with every new composer comes new discoveries of my own instrument through the study of the unique writing from each composers wishes. Bellini truly understood the beauty of the human voice through the simplicity of the creative melodic line and along with Rossini and Mozart knew how to spin a breathtaking melody. Next April, I will be singing Leicester in Maria Stuarda in Washington D.C. and in the near future I will be singing in Chicago Lyric Opera and returning to the Caramoor Festival.

OT: Your recent solo CD, A Fool For Love (released on Delos) was certainly well-received. Were you happy with the experience? Anything you wish you could change about it? Any selections you regret leaving out, or that ended up on the cutting room floor?

MS: Well firstly I’m extremely honored and happy to have a solo CD with orchestra out on the market. It was always a dream of mine to have my own album come out and now that is reality and I couldn’t be more thankful for Delos and Constantine Orbelian for believing in me enough to make this CD. I was able to manage almost every piece that I wanted on to the album but unfortunately I was not able to record Plus blanche hermine from Les Huguenots as planned.

I tried to make the CD with half standard repertoire and half slightly more obscure and I would say that we achieved this. I do wish that I would have had more recording time in the studio. We literally had 13 hours to rehearse and record 13 different arias with a newly formed orchestra who had never played together. We recorded four days then directly after we also performed two concerts, one in Moscow and one in St. Petersburg two days after. I am not complaining but it was a bit extreme and these types of difficulties and time/money constrains are a reality for putting out an album of this nature.

Read the full interview on www.OperaToday.com!

A Fool For Love