Our Own Olympian, Constantine Orbelian! 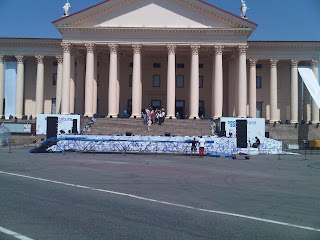 The Winter Olympics are going to Russia in 2014, and Sunday launched the opening ceremonies of The Russian Cultural Olympics. During this opening ceremonies, our very own Constantine Orbelian was the featured conductor! Now, to give you an idea of just how huge this was we’ll tell you how many people were there for Constantine’s performance — 50,000!

The program included music from the Delos album “Vodka and Caviar,” and a potpourri of favorite Russian film scores. Also Russian legend Josef Kobzon sang the Pakmutova song “Melodia” that Dmitri also sings on the “Moscow Nights” CD. Delos will have a DVD of the event at some point, and you’ll be the first to know right here on the blog whenever it is available. A four-year cultural event of this magnitude is amazing and appreciable by anyone who cares about the Arts, and 50,000 people in attendance for a classical performance is practically unfathomable in the U.S. So we hope this excites you as much as it does us, and we send our congrats to Constantine for such a wonderful success!

(The picture is a look at the stage during setup)