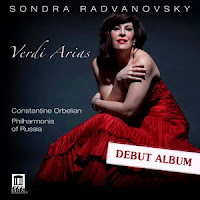 It was an exciting weekend for Sondra Radvanovsky fans! Not only did the debut album have overwhelming success, but fans were treated to full streaming audio and a review on NPR’s All Things Considered!

Here is a quote from Sunday’s “All Things Considered“: Tom Huizenga’s commentary about Sondra Radvanovsky and “Radvanovsky Sings Verdi” as he played snippets from La Forza del Destino and Il Trovatore:

“She blew me away! She opens her mouth and these huge streams of sound come flying out like giant multi-colored bolts of fabric — beautiful, shiny, silver, azure blue — and you can tell on the CD that the voice is really big… yet she knows how to harness all that power! And I think we should just listen to this passage from Verdi’s Il Trovatore, and it will explain everything….”

Check out the full streaming track that is hosted on NPR:

Currently, Verdi Arias is sitting at #52 on the Amazon Bestsellers list — for ALL Music! The album is ranked #39 when it comes to best selling new releases, and is ranked #2 in Classical Music! And it’s only been one week, so you can drive it even higher still!

If you still haven’t purchased Radvanovsky Sings Verdi, you can purchase it directly from Delos by clicking HERE!