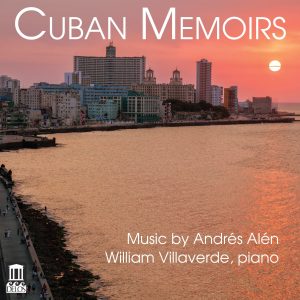 “It is with a mix of pleasure and surprise that I listened to Cuban Memoirs (DE3535), a Delos CD of piano music by Andrés Alén.…Through ten tracks, spanning roughly 54 minutes of playing time, the protean pianist William Villaverde. tackles and conquers the technical intricacies of Alén’s music. But that’s merely technique, and what matters in Villaverde’s playing are his soulful, quintessentially Latin interpretive gifts.

In the art of syncopating and playing off the beat, Villaverde is masterful, easygoing, joyfully off-hand. He sails through the six preludes by Alén without breaking a sweat, yet remains ever coolly elegant. The Danzón Legrand straddles the early high society dance with the French flair of a great composer of film music, and the substantial Theme and Variations on a theme by Pablo Milanés provides the satisfying ending to this treasure of a CD.

In all of this music, William Villaverde excels by not merely conquering the technical twists and turns of the music but infusing the music of  Andrés Alén with the insights of a  kindred Cuban musical soul.

Read the full review on RafaelMusicNotes.com