Our 35th Anniversary Opera Gala is a tribute to Delos founder Amelia S. Haygood (1919-2007). There was nothing Amelia loved more than great singing. For her, the glories of the human voice, the expressive power of vocal artistry, were lifelong cause for celebration.

As with everything Amelia championed, this program offers familiar repertoire done to perfection in an individual manner, along with fresh, seldom-heard gems that were discoveries for her and for Delos listeners. It’s the kind of program that Amelia would have chosen for herself.

The span of extraordinary singing represented here ranges from Delos’ first great vocal artist, Arleen Auger, in one of the earliest Delos digital recordings, to superstar Dmitri Hvorostovsky in his most recent aria album, the last Delos production that Amelia was able to hear.

Dmitri anchors the program, which begins with the “Pagliacci” Prologue and soon takes us to less familiar but entrancing territory. The Duet from Arensky’s “Raffaello,” written 15 years before “Der Rosenkavalier,” foreshadows Strauss’s ecstatic Trio from the last act. Natalia’s Cavatina from Tchaikovsky’s “Oprichnik” takes us to an emotional climax within three minutes. Both Auger and Podles are stunning in Handel arias; Renee Fleming gorgeous in Villa-Lobos “Sentimental Melody;” and Alessandra Marc a magnificent Turandot. Dmitri sings the passionate encore “Core ‘ngrato.”

And so Dmitri, as Tonio, invites us to begin.

Cast, in order of appearance (Click artist name to find all they have available on Delos)

Dmitri Hvorostovsky, baritone
“undoubtedly one of the voices of the century” Opera News • “…some of the most beautiful and eloquent sounds that can currently be heard from any human throat… His voice is redolent of luxury: beautiful tone, pinpoint intonation, elegant, and impassioned delivery.” The New York Times

Marina Domashenko, mezzo-soprano
“The Met is getting good at finding legitimate singers who look appropriate to the operas they are in…Ms. Domashenko has a warm sound and a seamless technique, and good looks that will help her go far.” The New York Times

Olga Guryakova, soprano
“one of the most exciting Russian sopranos to have emerged in recent years” BBC Magazine • “an important artist, genuine and generous, and reminds listeners of how marvelous and glorious the lyric soprano voice can be.” Opera News

Ewa Podles, contralto
“Is there anything this formidable artist cannot do? … it is difficult to imagine any other interpretation than hers, so profound is her musicality… Podles is a force of nature…” Opera News • “She’s been described as a ‘a vocal hurricane’; a ‘force of nature’; a singer ‘without peer in the world.’ But why beat around the bush? Ewa Podles is a goddess.., The sounds that pour out of Podles’s mouth seem to come from the core of the Earth, channelled through her body.” National Post, Toronto

Daniil Shtoda, tenor
“a fabulous voice – open, plangent, and vibrant in a very Russian way. What a lovely warm hearted, generous artist.” The Times of London

Renee Fleming, soprano
“…She is a definite rarity, a singer in direct lineage with the great voices of the past who were all, incidentally, beauties, just as Fleming certainly is: Mary Garden, Rosa Ponselle, Maria Jeritza, Geraldine Farrar, Teresa Berganza, Magda Olivero…They all brought an incomparable glamour to the opera stage and most of them were treated like film stars… Fleming is the most generous singer imaginable, always going the extra distance to sing superbly, never automatically. Every minute she sang was something like rapture.” The Vancouver Sun

Arleen Auger, soprano
“The extraordinary Arleen Auger” The Times of London • “an artistry that affords us a real glimpse of what we thought was a lost art.” Stereo Review • Auger’s “exquisite album of Love Songs [DE 3029] remains one of the finest compendiums of classical song ever issued.” Stereophile

Vsevolod Grivnov, tenor
“One of the most beautiful and thrilling tenor voices in the world today, his top notes have the golden gleam of a Wunderlich and his voice sounds as solid as Gedda’s. With a robust technique and model enunciation of the text, his musical instincts and projection are infallible, and he plays the romantic juvenile lead completely naturally.” – The Irish Times

Vassily Gerello, baritone
“The grandeur, tonal substance and old-fashioned clout of a truly significant vocal instrument, yet another in the astonishing recent Kirov baritone line” The Times of London

Alessandra Marc, soprano
“one of the richest and most powerful voices of the age” Gramophone • “rarely will you hear Puccini’s climactic phrases crested with such ease and beauty of tone.’ Opera News

In his dedication below, Constantine offers “insider” comments about Amelia and the recording sessions represented on this album: 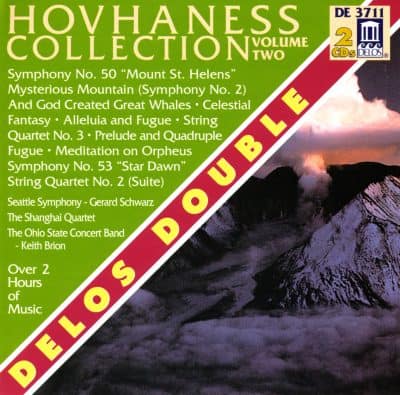