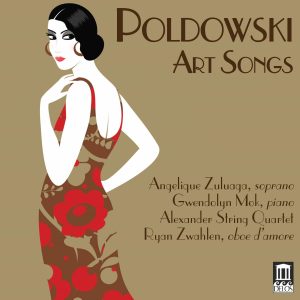 Like many other women composers of the past, Poldowski’s name is not particularly well known today. Yet between 1900 and her death in 1932, she was a well-known figure in such leading musical meccas as London, Brussels, and New York and — despite her own misgivings — was considered a successful com- poser. Now the rediscovery of Poldowski’s songs brings us closer to this fascinating woman.

Poldowski was the pseudonym of Lady Dean Paul, born Irène Régine Wieniawska, youngest daughter of the celebrated Polish violinist and composer Henryk Wieniawski. She was born in Brussels in 1879 but never knew her famous father due to his early death in 1880. She enjoyed a successful career as a pianist and was a largely self-taught composer. Some biographical sources suggest that she studied piano and composition at the Brussels Conservatoire, though there are no substantiating records. But she is known to have begun composing at an early age, with Schott publishing her first songs in Belgium in the 1890s. Around 1896, she moved to London, where she began to establish herself as a pianist and composer. In 1900, Chappell published Poldowski’s first London works, two songs with piano accompaniment.

In 1901 Poldowski married an aristocrat, Sir Aubrey Dean Paul; the marriage lasted until the couple separated in 1921. In 1902, she gave birth to her first son, Aubrey Donald, who died in 1904 — the same year her second son, Brian, was born; her daughter Brenda followed in 1907. During this period, she traveled to Paris to study with the composers André Gédalge and Vincent d’Indy, though no details of her studies there are known. From 1911 onwards, Roeder and Durand in Paris began publishing her French songs: mostly settings of the poetry of Paul Verlaine, for whose art she felt a great affinity.

In the 1920s, Chester in London published some of Poldowski’s music, including more French songs, solo piano pieces, and works for violin and piano as well as clarinet and piano. It appears that most of these songs, despite their dates of publication, were written between 1900 and 1910. Their frequent appearance on concert programs in London and elsewhere earned Poldowski the privilege of becoming personally acquainted with some of the leading performers of the day, including the tenor Gervase Elwes, one of her music’s most influential advocates.

Other close associates included Sir Malcolm Sargent, Sir Henry Wood (who twice invited her to perform her works at the Proms in the Queen’s Hall), and Sir Thomas Beecham, who was allegedly interested in producing one of her short operas. Indeed, Poldowski enjoyed a hectic social life within London’s musical scene, though she associated mostly with performers and artists rather than other composers. Still, she was friendly with some of her contemporaries, including Roger Quilter, Peter Warlock, and Maude Valerie White.

In 1924, in a letter to her publisher Chester, she expressed disappointment that more of her large-scale works had not been accepted for publication. Indeed, much of her oeuvre remains unpublished, and many of the original scores are missing. In 2003, however, her Sonata for Violin and Piano — after gathering dust in the National Library of Poland for many years — was finally published in the United States.

Poldowski’s earlier works, which appear to have been composed before the First World War, are French in style: one hears in them distinct echoes of Fauré and Debussy. Yet her own unique voice always prevails. Her later works — which began to be published in the 1920s — show a change in style, one that incorporates a more modernist approach to composition, with increasing use of dissonance and a tendency to explore greater degrees of instrumental virtuosity. For many years, these works remained unperformed.

During her lifetime, Poldowski’s works enjoyed international attention and were often featured on concert programs in the United Kingdom, Belgium, France, Spain, and the United States before fading into relative obscurity. But since the dawning of the new millennium, performers — particularly singers — are rediscovering her wonderful miniatures, which are again gaining exposure in concerts and recordings.

The restoration of an article about Poldowski in the 2001 edition of the New Grove Dictionary II (which, like those about so many other female composers, had been omitted from the previous edition) has prompted renewed interest in this fascinating lady, who sought to combine family life with musical endeavors and endured extreme hardships for the sake of her art. The death of her eldest son, the eventual breakup of her marriage, and her often disastrous financial situation, combined with poor health, meant that she had to be resourceful in order to survive. But despite her misfortunes, Poldowski’s indomitable spirit and musical gifts gained her the satisfaction of having her music heard — and heralded — during her lifetime.

In 1932, upon her untimely death after a long illness, her more influential friends organized a series of concerts to promote her life’s musical legacy and to honor her alleged final words: “Do look after my music!”

Poldowski’s talents were not con ned to music alone. Sources suggest that she wrote children’s stories and designed clothes for her aristocratic friends in the late 1920s, when money was scarce. During that time, she also penned four short essays that express her views on modernism in music, her thoughts on the influence of jazz, her adoration of Verlaine, and her celebration of two settings of Laurent de Tailhade’s poetry.