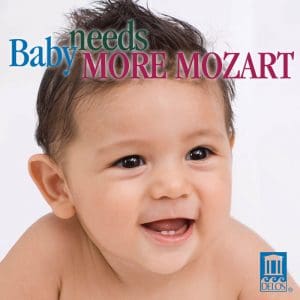 Over the past 20 years, there has been a lot of back-and-forth controversy about the still-incomplete scientific basis underlying the contention that early exposure of children to classical music – from infancy on – can promote learning and help develop the intellect. But ongoing high-tech research has, in recent years, tended to confirm such benefits, for adults as well as children. While few parents believe that a steady classical diet will magically transform little Junior into the next Einstein, most agree that the positive effects are very real – and that early exposure is, of course, key to a lifetime of classical enjoyment. Thus the time is right for Delos’ recent reissue of three titles (see below) from its ever-popular Baby Needs series: part of the world’s largest and most varied collection (25-plus CDs!) of classical CDs oriented to the very young.

And critics are taking notice. A Musicweb International critic who goes by the pen name of Byzantion has just submitted a thoughtful and positive review of Baby Needs More Mozart (DE 1614), originally issued in 1999. By association, he further speaks of the entire Baby Needs series. While, like most well-informed people, the reviewer takes certain “scientific” claims with a grain of salt, he’s definitely on board with the basic concept, as well as the overall need for more classical music in children’s lives. He welcomes renewed attention to the series, saying, “… a reissue would appear well timed, with more adults than ever seemingly under the misapprehension that young children require some or other variety of pop blasted at them at every opportunity. At any rate, ‘Baby Needs More Mozart’ is a thoughtful but non-trivial collection, offering infants and toddlers – and mums and dads – a gentle but varied ‘musical bridge between play time and quiet time’.” Comparing it (and the series) to another recent children’s series, he concludes that “…these Delos discs are a clear winner.”

So, if there are babies (or older children) in your life, we urge you to scroll down and explore our entire Baby Needs series. If you – like our reviewer – are concerned about how contemporary pop-dominated culture conditions today’s youthful listeners to shallow, three-minute sound-bytes and panders to the “least common denominator” among them, Delos can offer a sure-fire way to buck the negative trend and give your little ones the gift of a far better alternative!