Robert Nelson Breaks Down His First Three Works on “Watercolors” 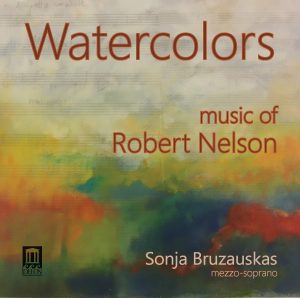 I had known tenor Randy Lacy through his work at the University of Houston’s Moores School of Music and the Houston Bach Society. I discovered—quite by chance—that he had written a number of poems, one of which was Sapphire. I was quite attracted to this poem, which was expressionistic and had wonderfully rich imagery. This suited my predilection at that time for a more post-tonal musical idiom. I was also attracted to the idea of substituting an oboe for the first violin of the string quartet and so conceived the piece for voice and piano quintet, but with the oboe. The piece was originally written for tenor, and I had always assumed that Randy himself would perform it. Unfortunately, this never happened. But because of the prominent oboe part, the piece came to Anne Leek’s attention, and she volunteered to perform it with the Greenbriar Consortium. Again, she gave me a choice of singers, and this time there was no question but that my choice would be Sonja. I was able to rework the vocal line to suit her voice. The rehearsals were a wonderful experience for me. I could just stand back as Sonja and the professionals of the Houston Symphony brought the work to life. Their sensitivity and attention to detail was most gratifying, and the performance was extraordinary. This became the first piece that we recorded freshly for the CD.

Bowls is a set of five poems. The graphic layout of the poems contributes greatly to the impact of the texts. Ava is dealing here with profound issues of the contemporary experience.

On the Question of Angels

This piece is written for voice, violin, cello, and piano four-hands. The poem is quite philo- sophical and muses on substantive issues of life and death, but the poem comes to an uplifting and optimistic conclusion.