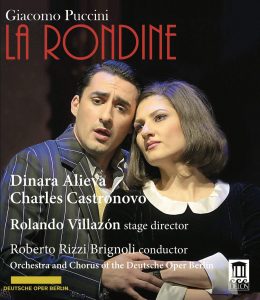 One finds Puccini’s Tosca, La Bohème, Madama Butterfly, and Turandot on the schedules of almost all opera houses. By contrast, La Rondine is one of the most seldom performed of his works. Puccini was originally asked to compose an operetta, and – indeed – he began to compose the work with that in mind. But Puccini is Puccini, and in the end, he made an opera out of it. Therefore, La Rondine is now considered a compromise between the two genres.

The plot of La Rondine is simpler than for many of the other subjects that Puccini set to music. Also, it’s not as complex musically as, say, Gianni Schicchi or La bohème. It is built as more of a “conversation piece,” and we finnd in the music many quotes from itself, wondrously beautiful melodies that are reprised, though in fresh dramatic directions. As Puccini would put it, “You know, all of this new music … but I’ll just write a few excellent melodies looking back to everything I’ve learned up to now.” Puccini went through a significant development; he wasn’t one of those composers who consistently wrote in the same style. He experimented and constantly reinvented himself. One hears just exactly that in La Rondine. But throughout, he exploited his wondrous melodies to their full potential. He wanted to make his public sigh – and he succeeded.

In order to make La Rondine interesting to today’s audiences, we need a fresh approach, since in Puccini’s intended form it’s too rosy, too “pretty” and somewhat one-dimensional. If one wants to give it more dramatic substance, one must find details that one can develop and with which one can experiment. That is a pleasurable, satisfying job because, after all, it’s Puccini, and still the work of a genius! 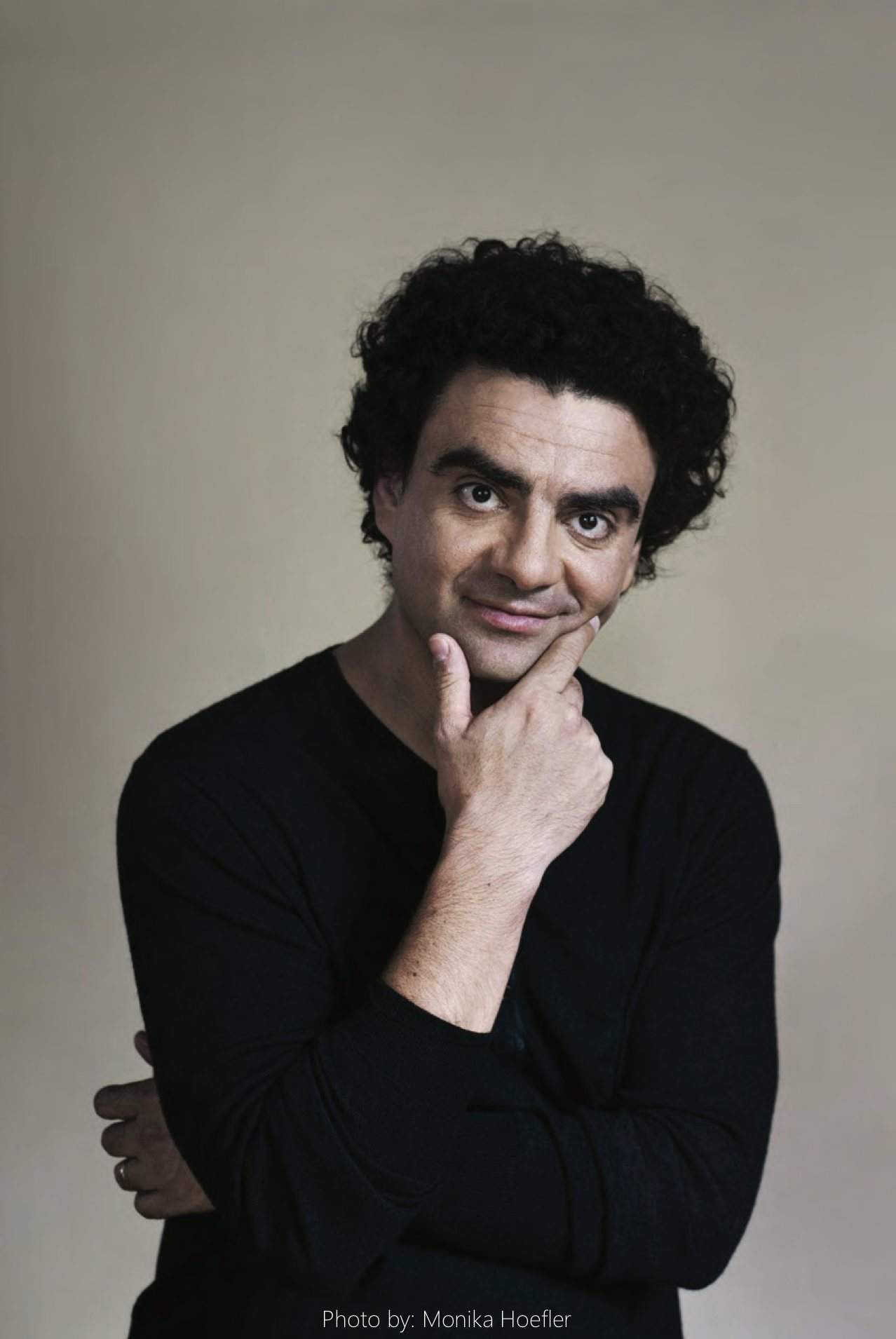 In La Rondine, it’s all about love. And about Magda, who at the end wants to stay free because she feels she doesn’t really belong to this kind of love, to this man and his life. Puccini himself struggled with this ending; he revised the third act and tried out various versions. In one, for example, he lets Rambaldo return, and treats Ruggero like Alfredo in La Traviata, leaving Magda as a victim of the society in which she lives. That, as you might say, is more operatic. Because in the end, the work, in its original form, lacks the decisive dramatic moment. On one hand, that’s the most problematic – but on the other hand, also the most fascinating – aspect of La Rondine.

There remains this wondrously beautiful piece, full of extraordinary melodies that speak of love both fulfilled and unrequited – but still without strong motives, without a rousing dramatic episode. Nobody dies; there is no person like Giorgio Germont in La Traviata, although the story is similar – just not as complicated. Here we have little dramatic character development and conclusive power.

It is therefore our duty as theatrical producers to create such power in another way. We must do more than simply tell a beautiful story – we must also create corners, edges and question marks in order to truly captivate the public. As an opera director, my most important obligation is to follow the music. But I also have the responsibility to find places where the music allows me to penetrate more deeply and undertake changes.

Staging a work means, first and foremost, firmly establishing the story’s place and time, and choosing an aesthetic. These are, where possible, the most important decisions a director must make. One must create a universe with its own rules, and within this universe, these rules must make sense. Placement of La Rondine’s story in Puccini’s own time allows us to deal with a period aesthetic that is closer to our own than that of earlier times. That’s because a production of the piece that’s set in the story’s original time of origin automatically takes it to a place that comes across more like a fairy tale that’s more romantic and transfigured than our own reality. But if one sets the opera in the era of the 1920s, the whole story is more easily grasped, and it’s easier for the public to identify with its characters. This setting also allows us to work – if one is very careful – with an artistic flow like that of surrealism. We can approach the charms of such an aesthetic, but then distance ourselves from it as well. 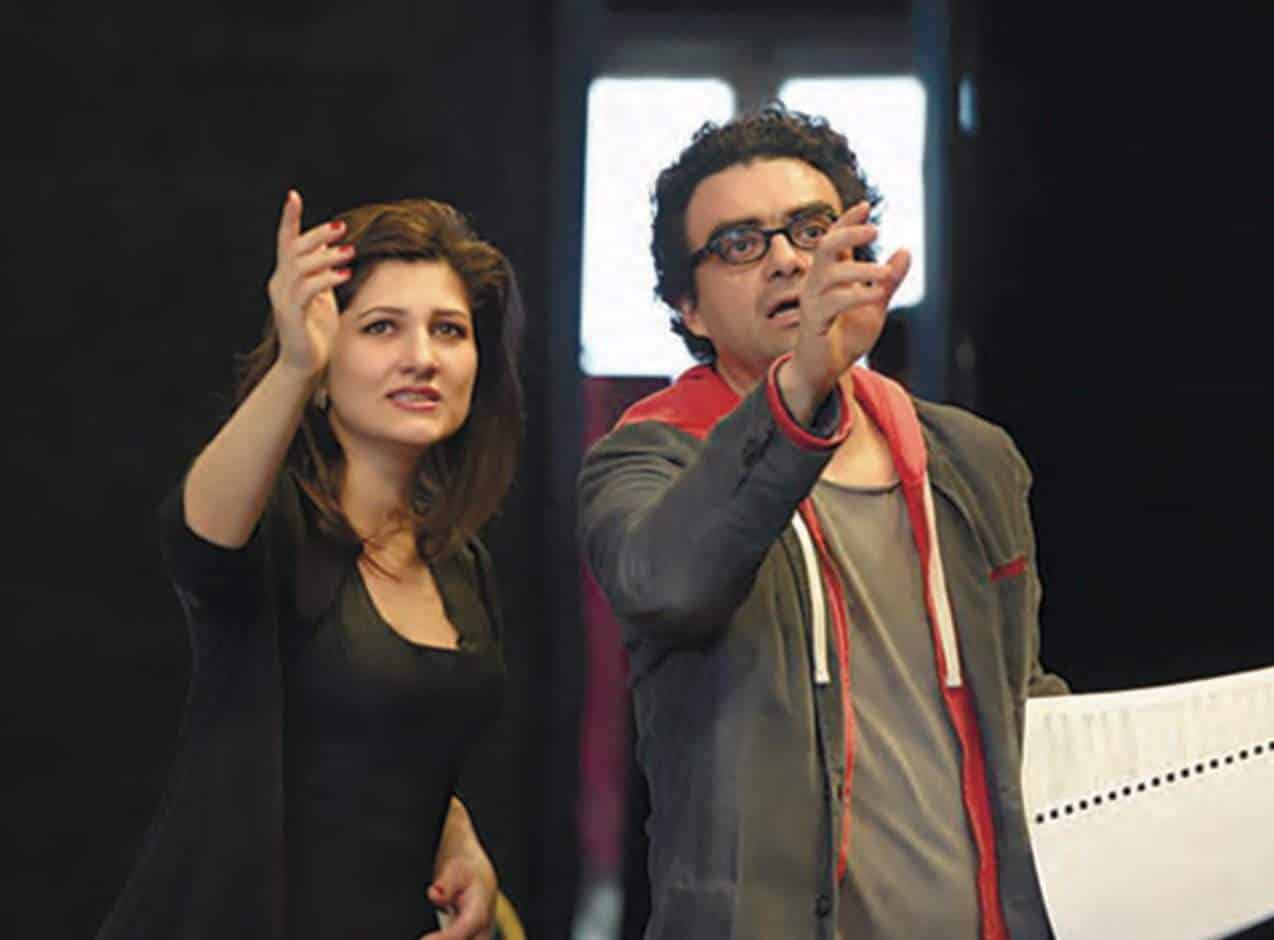 Indeed, Puccini bore no such surrealistic context in mind; but that emerges from his music, which appears to have just such a clear orientation. And yet there are definite colors and certain harmonic shifts that lend themselves well to such a magical sense of reality – an aesthetic to which I, as a Latin American native, am naturally drawn. Even if Puccini himself may well have wondered about some of the things that happen onstage here – for example, the masks or the cabaret – the images that we create (even the small ones) that consistently depart from reality and the original context, are musically motivated. I produce nothing that isn’t in keeping with the music – the harmonic shifts. Our context may not be the one that Puccini envisioned. But these days, we must apply all of our own experiences and our complete artistic heritage. We can’t interpret Puccini as simply a realist. Puccini is much more than verismo. His utopias go beyond the realistic, even if, at the same time, he was always interested in serving that which is realistic and making something plausible. In our version, we make only a few fleeting allusions to surreal moments, which one can just as easily describe as theatrical moments. Because, after all, we are in the theater – and the work’s province is the theater.

For me, theater is the stage for the subconscious; the mirror of our inner lives. In opera, music reflects emotions and brings them to the forefront. Therefore we accept that opera is sung rather than spoken – without second thoughts or to perceive it as laughable. When we fall in love, become jealous, or someone dies, we may well act in certain distinct ways – but there are trumpets, violins, and choirs within us that cry out. What the great composers do is to transform these in ways that enable us to understand and absorb them.

On our stage, a battle takes place: a fight against romantic love, against kitsch – a fight against, as we call it in our piece, “true love” – and, at the same time, a fight for the emphasis upon freedom: freedom of sensuality, the senses, the body – and for the freedom of women in our society. At the start of the 20th century, the traditional gender roles began to dissolve as women sought to find their self-defined place. Women took advantage of such new-found freedom to do things like smoke, to dress as men, to go dancing, and to decide either for or against the prospect of children. 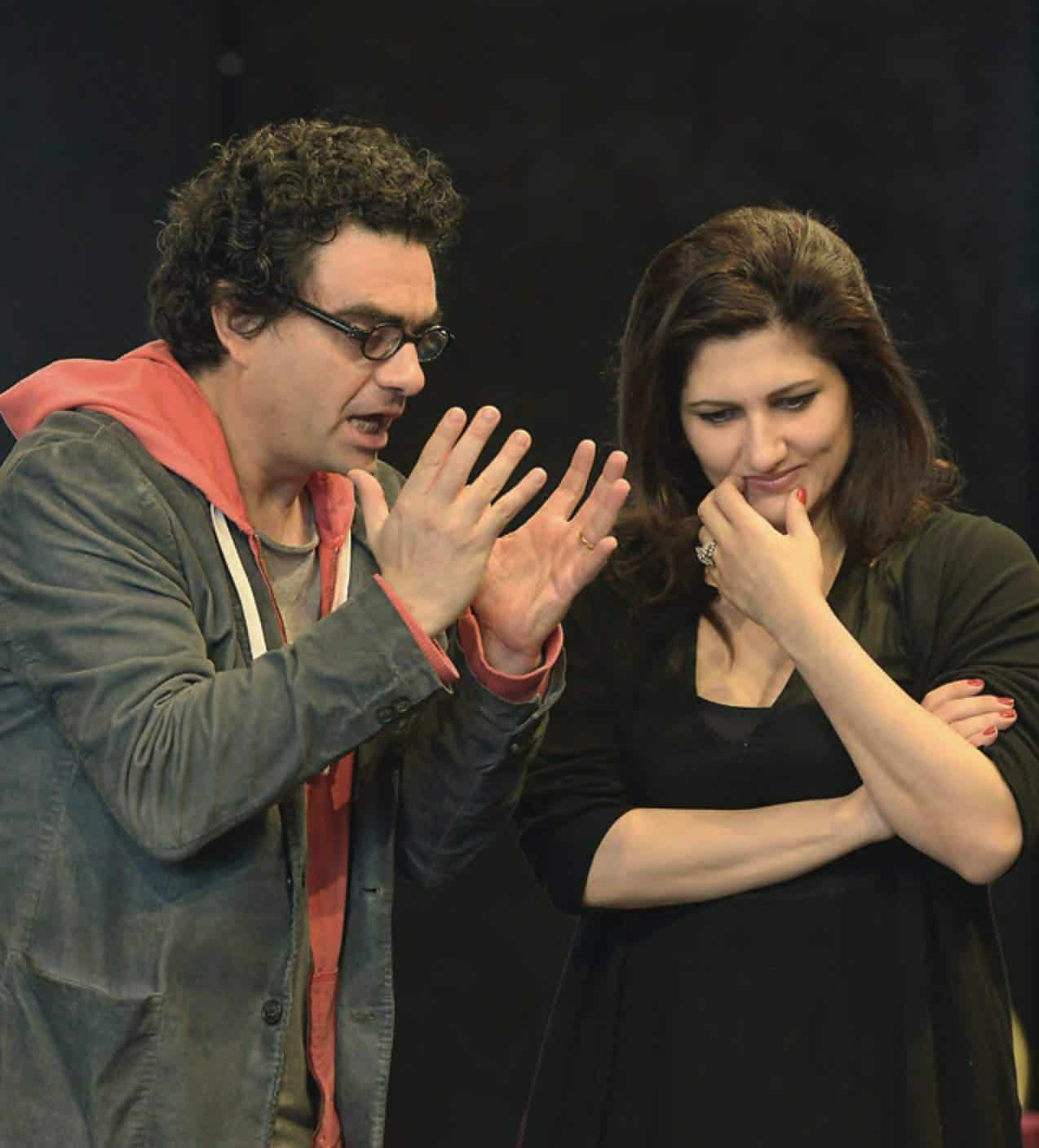 For me, Magda’s story represents the “battlefield” for just such developments. Magda may dream of “true love,” but what I discovered about her love is that in the version that we’re presenting, there is so much more than this “true love.” She wants freedom. It breaks Magda’s heart to leave this man who is indeed worthy of her love, though she knows she will be happier if she’s free. She would have to pay a price for either alternative, and she decides in the end to pay the price for her freedom. And I believe she makes the right choice.

Audiences will perhaps have to reflect upon the ending and arrive at their own conclusions. As the director, I don’t want to give any definitive answer; thus the audience’s answers will vary from one person to the next. Not everything that happens onstage can be explained. On the contrary, perhaps not everything should be explained. A lot is there, simply because it belongs there. That’s all. That’s part of the rules of the game.

Let’s consider the stage set: The public should be inspired to enter the new world it represents. This world cannot and should not appear like our own real world, since at this point we can’t dispute what happens onstage. Especially nowadays, theater has its own wonderful visual language. And we should trust this language; we should even strive constantly to do so, and with all the senses. I love that everything onstage is part of the play. Not only do we act upon the set; the set itself acts – introducing itself and moving forward from there. It’s a constantly changing apparatus that interacts with the characters. In this production, the stage becomes a collaborator, yet another actor. The lighting also plays a special role within this context – for me, it embodies yet another fellow actor that not only lends the scenes color, but also tells us something. The same applies to the costumes. They’re not only there to look good; they express emotions and define the characters. For example, costume changes are not done in order to simply present additional beautiful costumes. That Lisette repeatedly changes her costumes has something to do with her flexible, energy-laden personality. At the same time, that also applies to a more significant matter: changing personalities and the evolution of women’s roles in this work and in this society. From her initial sober chambermaid’s costume, she transforms to a garçonne (a woman who dresses and acts like a young man), then to a party girl, and all the way to a wonderful woman, who liberates herself from them all. Considering such constant changes to her outer appearance, Lisette is the embodiment of absolute freedom. 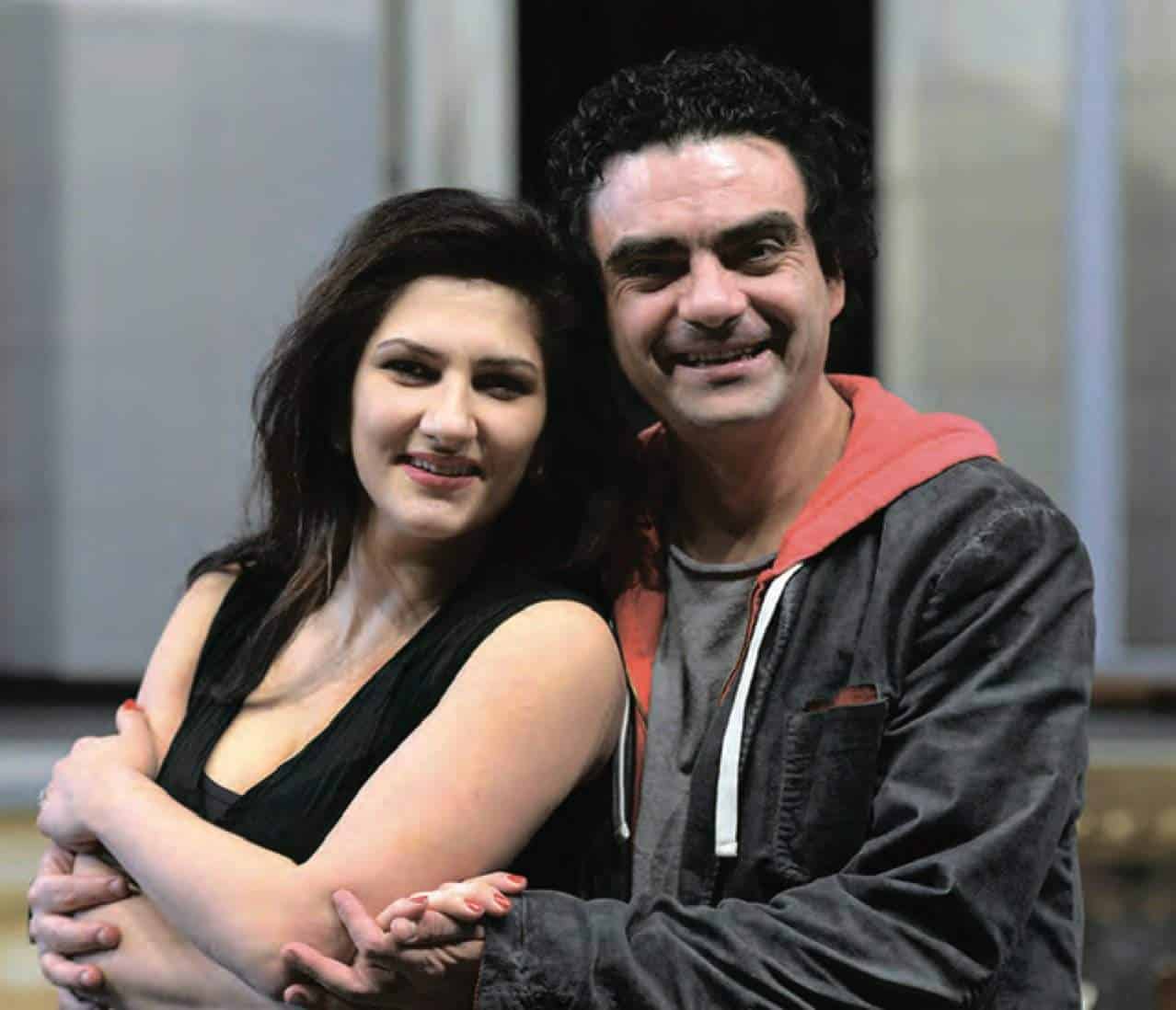 Such striving for freedom, even at the cost of true love, is the theme of La Rondine. In that regard, the ending deliberately leaves everything open. Magda could take her own life, but – as a freedom-loving woman – would she have really done it? She could return to her friends, or accept Ruggero … and he could accept her as she is. The “happy ending” that we expect from an operetta would then be fulfilled. But instead, the ending is enigmatic. The music slowly fades away after the intense concluding duet, and the single final note is heard as if from a distance. What does it mean? Relief? Grief? Doubt? Joy? I believe it’s a mixture of them all. That’s why this last note sounds so complete – so full of wonder. The fact that it’s sung as if from a distance – that the soprano doesn’t step to the front and bellow out her final notes – indicates a moment of progress: the dawning of a new stage in her life. One could describe it as a subconsciously composed note. But could it be that Puccini wants to use it to symbolize a gradual departure from opera as it used to be – so that we can develop the genre further from that point? At that time, he was already working on Il Trittico. Thus he was, in fact, in the process of his own evolution. Puccini never shied away from seeking something new, from making new discoveries, from reinventing himself. It’s not only our duty to the composer to respect the work, but also to take it further. Not everybody in the hall has to be in agreement. Some fights must continue: the conflicts of romantic love and outright beauty with new directions, renewal and freedom.

This riveting and beautifully portrayed video account of La Rondine stars the rapidly emerging soprano (and Delos artist) Dinara Alieva and widely acclaimed tenor Charles Castronovo in the lead roles. Filmed live at the top-ranked Deutsche Oper Berlin, the action unfolds in a dazzling and profound production under the direction of legendary tenor and stage director Rolando Villazón and conducted by the renownedMaestro Roberto Rizzi Brignoli.