Notes on Shostakovich Cello Concerto No. 1 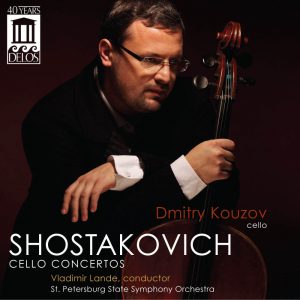 Dmitri Shostakovich (1906-1975) composed both of his cello concertos for Russian cellist and all-around musical icon Mstislav Rostropovich, also the composer’s dear friend. The Cello Concerto No. 1 was completed in 1959, at a time in post-Stalinist Russia when cultural restrictions had eased somewhat – though they were by no means a thing of the past. Rostropovich gave both its Russian and American premieres later that same year. Perhaps the most popular twentieth-century cello concerto (and one of the most difficult ever of its kind), it is a deeply personal work, reflecting Shostakovich’s ambivalent emotions and insecurities at having to constantly walk an “artistic tightrope” in Soviet Russia’s often unpredictable and often hostile cultural environment – in which he might well be a ballyhooed hero one day and a reviled scapegoat the next.

Like a number of his other quasi-autobiographical works (most notably his eighth string quartet), the central thematic feature here is a series of like-sounding variants on Shostakovich’s hallmark four-note “DSCH” sequence (D, E-flat, C, and B in German notation) that corresponds to the “D” of his first name followed by the first three Russian letters of his last name. This recurs in several forms – with different starting points, note sequences and intervals – throughout the work, except in the second movement. The piece is fairly lightly scored – with the only brass instrument being a single French horn, which turns out to play a vital role as the concerto progresses.

The first movement’s main theme is heard in its first four notes (G, E, B, and B-flat) from the soloist – seeming to pose an unsettling question. From there, the music unfolds in mostly concentrated and supple fashion, maintaining a persistent aura of animated tension throughout its course. The single horn appears to emphatically reinforce the theme as the music grows in anxious intensity. The slow movement begins with a theme that, oddly, is never taken up by the cello; instead, after the horn sets up its entrance, the cello appears with its own theme. The movement proceeds with a sense of uneasy, yet lyrically elegiac reflection – with episodes of typical Russian gloom and intermittent groundswells of bleak and searing desolation.

Ensuing without pause, the unusual third movement is actually an extended solo cadenza that – at first – maintains the preceding movement’s melancholic mood in its pensive soliloquy. But then it gradually rises in tempo and intensity, setting up – again without pause – the compact, rondo-like finale in which its main theme (based loosely on a Georgian folksong that Stalin had been fond of) alternates in a lively, but nervous manner with contrasting material. Then, about halfway through, the first movement’s quasi-autobiographical theme returns with a vengeance – confirmed by a mighty horn call. But the motif is no longer questioning, taking on a more positive quality as the music hurtles to a triumphant finish … even though Stalin’s Georgian tune still lurks beneath the surface in the coda. Still, the movement is emphatically sealed by final “exclamation points” from the timpani.