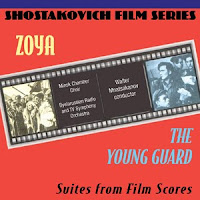 At the beginning of this month we told you about our re-release of Constantine Orbelian’s recording series of Shostakovich Film Music. We released the first of these in February, and have more on the way. Today we wanted to excerpt a review of Volume 1 and direct you to read the review in its entirety!

From the blog Film Music the Neglected Art:

Part 1 of a series of re-releases originally introduced on the defunct Russian Disc label, Delos offers a 1995 recording of music from the films The Young Guard (1947-48) and Zoya(1944).There will be three additional titles released over the spring and summer of 2010.

Shostakovich composed for 34 films over a period of 40+ years. As he was quick to point out Russian film-making was an industry not art and he was likely involved to put food on the table and pay his bills. Like the propaganda filled movies that he had to score, his scores were watched with scrutiny from Stalin. That being said, the material is far better than many scores you’re likely to hear during that time frame of the 40’s. Shostakovich was a master composer and it even showed in these propaganda pieces.

The material in this recording of The Young Guard (1947/48) comes from the suite that Leon Avtomyan arranged. It includes the best material in the 7 track 30 minute musical excursion but does omit the brooding prelude and the love music.

Please read the review in it’s entirety on the blog “Film Music – The Neglected Art.”