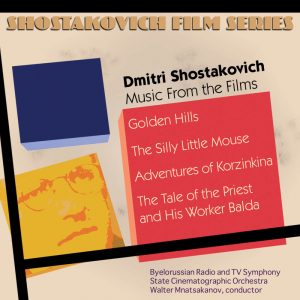 We recently released Volume Five of the Shostakovich Film Series, and today we’re happy to bring you a new Delos Podcast. It consists of an interview with Paul Cortese as we talk about Shostakovich and the origins of film music. This is a fun podcast with lots of music, and the opportunity to learn something about a genre of music many in the classical world don’t often think about. We are also happy to announce that the first previously unreleased volume in the series, Volume Six, will be released soon and will feature music from the films Five Days Five Nights, Fall of Berlin, and The Meeting on the Elbe.

A little background on Paul Cortese:

Paul Cortese, Assistant Director of the Texas Christian University School of Music, is a musician-technologist who has successfully combined his previous roles as project manager, guitarist, teacher, composer, audio engineer, graphic designer, and computer programmer into a diverse and unique skill set.

At TCU, Paul teaches MUSI 10083 Introduction to Film Music, a course he developed that examines the history and aesthetics of the cinematic soundtrack.