Journal of the Society for American Music Reviews Arthur Foote 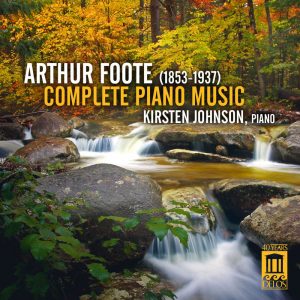 A fantastic review of Kirsten Johnson’s Arthur Foote: Complete Piano Music recording was published in the February 2015 issue of the Journal of the Society for American Music:

“This recording of the complete piano music of Arthur Foote, performed by Kirsten Johnson, is a major contribution in the study not only of the music of the composer, but also of the piano music of the time being performed in the salons of Boston and probably the rest of the United States. … The recording also should inspire current pianists to perform this almost forgotten repertoire of important and beautiful music by an eminent American composer. … This set of three discs is especially significant because there are practically no recordings of Foote’s piano music… Johnson has done a remarkable job locating all of Foote’s piano music in various libraries throughout the United States, most of which has been out of print for decades. Her performance is brilliant, both in piano technique and expression. She has mastered the romantic style of the time and has communicated it to the listener. With her beautiful sound and exquisite phrasing, she has made Foote’s piano music come alive. A self-proclaimed “piano explorer,” this internationally acclaimed concert artist has built her reputation on making world premiere recordings of forgotten music of the classical repertoire. … Johnson’s recording of Foote’s music has created international interest in this American composer, with well-deserved rave reviews on both sides of the Atlantic Ocean. This writer agrees and hopes the recording will help bring Foote’s piano music the attention it deserves.” —Marilynn Jean Smiley, Journal of the Society for American Music

Find out more about this review at Cambridge Journals Online

Buy From Delos & Save!