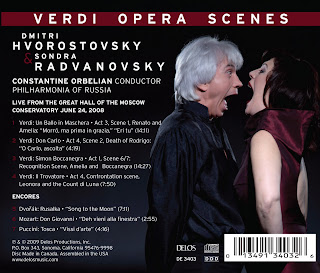 These days you can’t read music news without hearing about Sondra Radvanovsky and/or Dmitri Hvorostovsky; whether it’s a review of their new Delos release Verdi Opera Scenes, a recital, an recent opera performance, or a future opera performance. Fortunately, we love reading and sharing just about all of it.

From Cleveland.com (The Cleveland Plain Dealer):

“Here are two of the healthiest operatic voices of our time squeezing the emotional juice from prime Verdi fare. Dmitri Hovorostovky goes beneath the surface of his characters to reveal their expressive core. He is in splendid, stentorian voice, and Sondra Radvanovsky equals his passion, singing with exceptional vibrancy and nuance… Constantine Orbelian is the dynamic conductor of the Philharmonia of Russia. Grade: A – Donald Rosenberg (Full review on Cleveland.com)

Dmitri Hvorostovsky finished his American Five Cities Recital tour that was bringing in headlines from across the country. Here is a little from the Boston Globe after his recital at Symphony Hall:

“But Hvorostovsky is also a serious musician and a serious singer. His sound is a singular thing, its dark core sensationally consistent all the way into its top. It’s full of lyricism and presence, falling like a rich shadow across every corner of the hall, the edges burnished and smooth. His superb accompanist, Ivari Ilja, provided amply elegant support: a lucid, restrained touch with a delicate glint, over slow-drifting floes of bass, weighty but fluid.

“Two of Franz Liszt’s “Tre Sonetti de Petrarca’’ were given full operatic scope, Hvorostovsky tapping into the high-tension wire of Liszt’s expansive line, Ilja matching with an orchestral depth of tone. Tchaikovsky’s Op. 73 Romances found Hvorostovsky in full control, conversational and exhortatory by turns, judiciously modulating between intimacy and power, his voice effortlessly enveloping the music and the hall.

“The encores recapitulated those poles. Hvorostovsky brought a nefarious relish to Iago’s “Credo’’ from Verdi’s “Otello,’’ then counterbalanced with a restrained rendition of Rachmaninoff’s “In the Silence of the Night’’: showy and searching, with enough voice and charisma for either — or both.”

Perhaps the best indicator that Sondra and Dmitri are everywhere these days comes from a recent article in the New York Times discussing how Verdi operas that dealt with 19th century Italian politics are being used as parallels with modern Italian politics. Toward the very end, we get this brief gem:

One of the most exciting events will come at the end of April. Sondra Radvanovsky and Dmitri Hvorostovsky will be performing together at the Metropolitan Opera in Verdi’s Il Trovatore from April 20-30. Even better, on April 30th, the final performance of Il Trovatore will be broadcast live in HD in theaters all around the world as a part of the Met HD Season. That means you will be able to see these two in a live performance no matter where you live. For more information on the broadcast, and to purchase theater tickets, visit the MetOperaFamily.org.

Take a listen to the Confrontation Scene from Act IV of Il Trovatore on the new Verdi Opera Scenes album available on Delos.