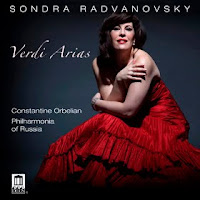 Delos is pleased to announce that we are releasing the album “Verdi Arias” featuring Sondra Radvanovsky TOMORROW!! So, to help get you excited we thought we would present a Q-and-A session done with Sondra and Time Out New York.

Q and A with Sondra Radvanovsky: Down-to-earth diva

For all the glamor she exudes as today’s leading Verdian soprano, Sondra Radvanovsky lives a rather quiet life offstage. “I walk around the house in my pajamas all day if I want to,” she says of the rare time she spends at home in a ten-acre house in the Canadian countryside. Given recent real estate deals like Russian diva Anna Netrebko’s new digs on the Upper West Side, it all seems rather modest, something Radvanovsky is okay with. We caught up with her by phone (presumably in pajamas) to talk about her upcoming concert at Carnegie Hall with Dmitri Hvorostovsky (April 1), the pair’s onstage antics and Lady Gaga.

You’ve been touring right now with Dmitri Hvorostovsky in the same concert program we’ll see at Carnegie Hall on Thursday. How has it been working with him?

He’s great, really. We first met each other two years ago when we sang a concert together in Moscow, which is now a CD. He’s such a joy. Besides the obvious that he has a God-given talent with his voice and it’s one of the most beautiful voices I ever heard in my life, on top of that he’s the most generous person in real life. There’s not enough wonderful things to say about him.

You mentioned in an interview with blogger Opera Chic that you’ve also pranked one another onstage. What’s gone down?

He’ll do something to me at a point when I can’t do anything to him—which is not fair. In San Francisco [in Il Trovatore], he had the makeup artist draw this devil about the size of a fist on his chest. And then he blacked out one of his teeth and at one point cracked a smile. And here we are singing this duet where I say “I don’t love you, but I’ll give you myself if you save the tenor’s life”—pretty interesting, hot stuff. And then at one point, where he’s hugging me, he pulls his shirt to one side and I can just see the devil. And Dima has this little devilish grin that he gets that says “I got you.” In London when we did Trovatore together, he painted eyeballs on his eyelids. And at the concert on Saturday night, he apparently did something but then chickened out and didn’t do it. So I’m just waiting for when we do our concert together or in New York for something. I just have to be prepared for it.

Have you ever gotten him back?

I did [once]. I wrote on my hand…in the last act of Trovatore when I’m dying, he comes in and hangs over me and cries, like “Why did you die??” So I wrote on my upstage hand “I heart Dmitri Hvorostovsky.” But that just doesn’t compare to a little devil painted on your chest. You can’t compete with that, you know? So I’ve been brooding and scheming. Seriously, we’re two kids. And that’s what’s been so much fun about working with him. It’s not the standard boring thing.

Read the full interview at Time Out New York