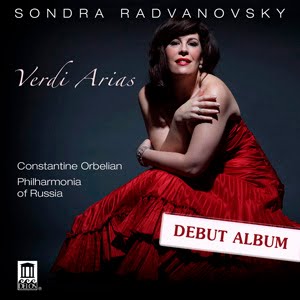 Sondra Radvanovsky’s Debut Release “Verdi Arias” has been named a Top 50 album of the year by NPR Music. That is from ALL GENRES of music!

NPR Classical names “Verdi Arias” the #2 ALBUM OF THE YEAR!

Here are some quotes from the NPR Classical Blog:

“We had at least two promising debut CDs. Early in the year, soprano Sondra Radvanovsky released her all-Verdi disc, proving that she could soon become a top contender in the lyrico-spinto repertoire, very much in the Renata Tebaldi mold.”

“Hearing an incredible new voice for the first time in concert is a particular thrill for me. Soprano Sondra Radvanovsky at the Kennedy Center this spring was a blow-away moment. Just after that, she released an extraordinary all-Verdi CD. Radvanovsky opens her mouth and huge streams of sound soar like giant bolts of multicolored fabric — shimmering silver, azure blue. These days, very few sopranos have what Radvanovsky has in her voice: generous size and weight, dramatic intensity, dynamic control and coloring. It’s a combination essential for singing Verdi’s greatest soprano roles. If Radvanovsky continues at this level, we’ll have a major new star on our hands.”

Here’s the quote from the NPR Music Top 50 list:

“It’s no stretch to say that the American soprano Sondra Radvanovsky is one of the great Verdi singers of this generation. Her voice is instantly recognizable — bright and full at the same time, and perfect for bel canto singing. She soars through her upper registers in full voice with no discernible effort. This debut record of all Verdi material has earned her gushing reviews. The aria “Tacea la notte placida” shows Radvanovsky in one of her signature roles, Leonora from Il Trovatore. This is a recording I’ll still want to hear in 50 years, though the audio format remains to be seen. (Ashalen Sims)”

Sondra even has a full archive on NPR! Click to see it! 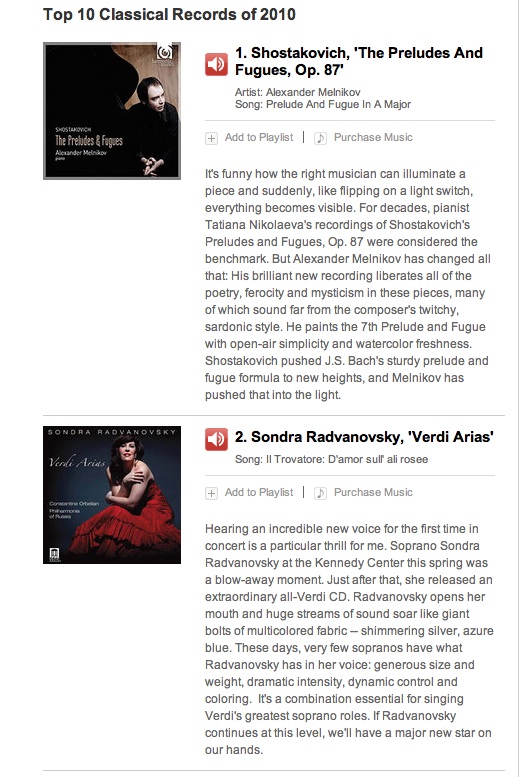 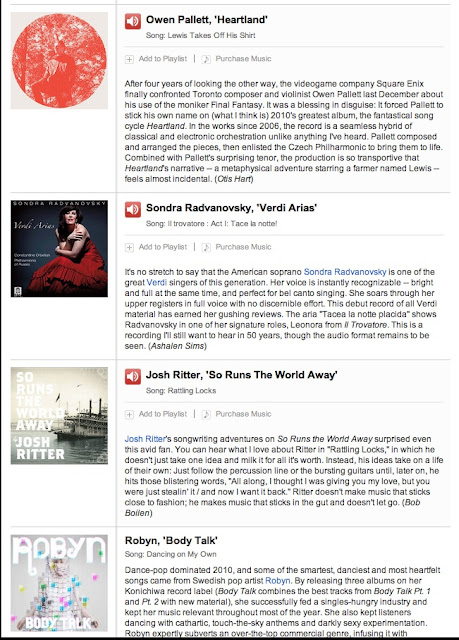 So join us in congratulating Sondra on such wonderful success! “Like” this blog and share it with all of your friends! Spread the music, and spread the love!

If you STILL don’t have this phenomenal album, click here immediately!