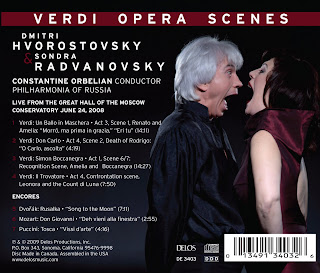 Delos is delighted to offer you an incredible treat on the Delos Podcast this week: an exclusive, three-part interview with soprano Sondra Radvanovsky. The interview is conducted by noted music writer and critic Lindsay Koob. In the interview, Sondra and Lindsay talk about her two Delos releases, “Verdi Arias” and “Verdi Opera Scenes,” the evolution of her career, and of course her current run of Il Trovatore at the Met that culminates in a Live HD broadcast on April 30th.

A little about Lindsay Koob:
Lindsay Koob, beginning in his wonder years as an “army brat,” was blessed to cut his musical teeth in places like Vienna and Munich. Amid academic training in English, foreign languages and international affairs, private music lessons produced a lifelong amateur pianist, semi-pro choral singer, and all-around classical geek. Following his military career, he returned to his native Charleston, SC – where he became resident classical guru at the city’s main CD store. His musical and literary proclivities further led to his now-thriving career in music journalism. Writing extensively for both local and national publications, Lindsay has become the most prolific (and notorious) chronicler of Charleston’s burgeoning performing arts scene – to include the fabled Spoleto USA festival – while gaining an international readership as a regular reviewer of choral CDs for American Record Guide. He remains an avid freelance church musician. Lindsay is now the newest member of the Delos team – happily writing CD liner notes, conducting artist interviews, and working with The Delos Insider.