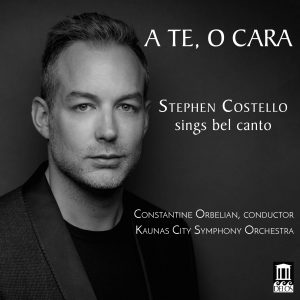 The sounds that emerge from tenor Stephen Costello’s Delos recording A te, o  provide bel canto lovers’ ears with copious reasons to rejoice, but it is heart—the hearts of the characters whose music is sung, the heart of the singer bringing them to life, and the reactions of the listener’s heart to these performances—that makes this disc one to be celebrated as an important artist’s homage to the art that uplifts him. … [Stephen Costello] has enjoyed fruitful collaborations with musicians who complement his sensibilities, among whom conductor Constantine Orbelian and the instrumentalists of Kaunas City Symphony Orchestra must now be included. Conducting broad arrays of voices and repertoire, Orbelian has affirmed his affinity for spotlighting his colleagues’ strengths on critically-lauded recordings. Orbelian paces the performances on A te, o  with equal concerns for supporting the singer and preserving the natural contours of the music. None of the arias on the disc is an orchestral showpiece, and Orbelian rightly guides the listener’s attention to the voice. … At its most joyous, there is almost always a vein of wistfulness in bel canto, and A te, o  is a disc in which smiles and tears meld with staggering verisimilitude. This is one of the glorious capabilities of music, and Stephen Costello brandishes it on this disc and on stage with vocal gold and artistic generosity.”