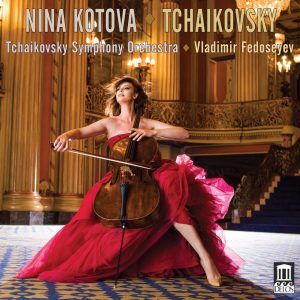 The composition has been in Nina Kotova’s recital and concerto repertoire since she was fifteen. Nina writes this about the piece: “Pezzo capriccioso connotes capriciousness in the sense that there are multiple changes in musical character in the score. The work’s introduction opens with a dramatic line after which the mood changes into a captivating lyrical melody followed by alternating thematic material of ornate refinement, changes from minor to major, running passages and broad lyrical lines in the solo cello part. This character brings to mind the expression of ‘light sadness,’ a term coined by Pushkin to describe the Russian soul. The middle section and coda are contrasting and highly virtuosic with shimmering spiccato and scherzo-like rhythmic elements. The solo cello part ends with a crescendo culminating with a dizzying passage in the third octave.”