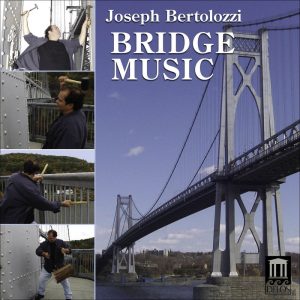 Joseph Bertolozzi is in Paris making his recordings of the Eiffel Tower for his upcoming Tower Music recording, and it’s starting to get some major attention – including The New York Times:

“His mission is to ‘play the Eiffel Tower’ by striking its surfaces, collecting sounds through a microphone and using them as samples for an hourlong composition called ‘Tower Music.’ He eventually hopes for a live, on-site performance of the work to celebrate the tower’s 125th anniversary next year…

“As outlandish as Mr. Bertolozzi’s project seems, it actually falls within a longstanding tradition of percussion works produced by found objects. One example is Magnus Lindberg’s ‘Kraft,’ scored for orchestra and percussion ‘instruments’ found in local junkyards — like brake drums and wheel rims — and performed in recent years by the New York Philharmonic. This time the object happens to be a giant monument in a European capital, but it is not the first large structure from which Mr. Bertolozzi has created a work. He also composed ‘Bridge Music,’ a piece consisting of sounds culled from the Franklin D. Roosevelt Mid-Hudson Bridge, near Poughkeepsie, N.Y.

On the second day of a two-week expedition that started last month, Mr. Bertolozzi and his team had already recorded about 400 sounds. He struck girders, spindles and handrails with drum sticks, wooden dowels, Lucite mallets and rubber hammers, some of which he had designed.

‘We see if the sounds have a pitch relation, like do re mi,’ Mr. Bertolozzi said, adding, ‘The different dimensions of the Eiffel Tower give you different notes.’ For instance, ‘if you have a big panel, it will vibrate slower and longer, so you’ll produce a deeper pitch, usually.’ The vertical shape of the tower, he said, ‘gives you a great number of resources if you need high notes, middle notes, low notes.'” — The New York Times

Read the full feature on NyTimes.com!