Recent Delos release, From the Unforgetting Skies: The Piano Music of Margaret Ruthven Lang, has been getting some warranted attention lately. Composer Steven Kennedy’s Cinemusical blog gives Lucy Mauro’s latest recording 4/4 stars in a wonderful review, and WXXI radio has a fantastic interview with Lucy about the recording!

Stream the interview courtesy of wxxi.org: 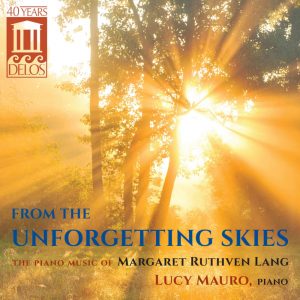 “Lang’s music is very much a part of 19th-Century romantic style and is both as engaging as it is rather well-laid out for the piano. Most unfortunate is that she stopped performing and composing in 1919 and her music also fell into neglect. Mauro’s survey includes some very early pieces as well as some of the last works Lang composed. The music holds its foot in romantic writing even in the opening piece from 1917, The Spirit of the Old House, Op. 58. One can also hear an intriguing blend of Liszt-ian drama with the sensitivity of a Chopin Ballade in the relatively beautiful Rhapsody in e, Op. 21 which includes some great harmonic writing that moves the music into interesting areas.

After a few of these miniature standalone pieces, Mauro turns to a couple larger suites of sort. The first of these is the Petit Roman, Op. 18. These six somewhat narrative pieces are a delightful blend of storytelling in music with a touch of salon and Gottschalk-like musical showpieces. They are highly romantic and feature plenty of arpeggios against deeply intense thematic ideas. Again, the harmonic movement is often quite fascinating in its shifts to key areas along the way (a touch of Liszt perhaps). It is easily one of the highlights of the album, among a treasury of great piano music. …

“The disc ends with four brief miniature tone pictures that move through moods of reflection or periods of the day. Each features rather interesting harmonic ideas with Twilight (1894) providing an awareness of the developing jazz harmonies and impressionism of the latter part of the century. Hearing these works is a refreshing way to hear another important American musical voice while having another window at one of the 19th Century’s virtuoso pianist-composers. Lang’s music has a great warmth and wit as well as a very good dramatic sense that seems to bridge salon music with the concert hall leaving one’s audience enrapt by the gorgeous music.

The Delos release has a good piano sound and Mauro’s performances are excellent. This is an important release of American music that is filled with captivating music.” — Steven A. Kennedy, Cinemusical

Find the full review on the Cinemusical Blog.