The Story Behind Amit Peled’s Cello 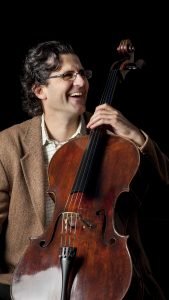 When Amit Peled was 10, he would fall asleep every night listening to Pablo Casals on his boombox.…[At 28] the the director of the Washington Performing Arts Society… introduced him to Casals’ widow, Marta Casals Istomin. She made the offer that changed his life: “Would you like to come and try the maestro’s cello?” Did he ever. “I thought, ‘I’m done,’” he says. “I was in heaven.” Although a couple of cellists have performed on the instrument since Casals death, the cello has been on more or less permanent loan to Peled since 2012.

Read the full story at www.free-times.com

Delos has the tremendous honor of issuing the first-ever album devoted to the wonderful compositions of Nadia Boulanger: truly a release of great historical importance.

None dispute that Boulanger was by far the twentieth century’s most influential composition teacher. Yet “Mademoiselle,” as she has long been known in the music world, dismissed her own works as “useless,” with the result that they are almost completely unknown to the musical public today. But not anymore.…