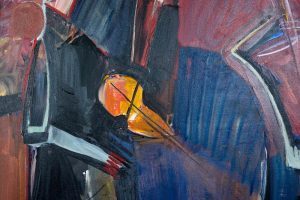 We piled into our van for the drive from Lugo to Modena. Our driver, Vittoria, also happens to be the drummer in a rock band called Massimo Volume which has been around for a number of years and is quite well known in Italy and has toured the states several times.

In Modena, the Rileys went to the hotel, but since Steph and I have to return to Bologna at the end of the night, (early flight out of Bologna in the morning,) we have no hotel in town and so we went straight to the beautiful Teatro Communale Luciano Pavarotti. In that classic 19th century Italian Style, it’s very similar to the theater in Lugo but twice as big, holding about 800. Steph and I had a little time to stroll around town, get a bite to eat, shop for a few gifts for the kids (and ourselves—you can’t come to Modena and not come home with fancy balsamic vinegar,) and then back to the theater for sound check. The tech crew was the same great guys as last night in Lugo, so everything was already set up for us. They had rented 2 great sounding Fenders for me for which made the shows really fun for me. Playing is so much more enjoyable when it sounds great. Add to that the amazing acoustics of the hall, and we were all in the mood for a great show. In between soundcheck and the concert, I had a little time to grab a nap on one of the narrow benches that were in all of the boxes.

We had put a set list together at soundcheck, but just before walking onstage, Terry had an idea—he wanted to start the show with a raga which corresponded to just that hour of the evening, 9:00. Terry said the raga is in the same mode as the tune we were going to close the show with, the Italian premier of a new piece we had put together in Arles in the fall which Terry was calling “Camargue Voices”. So he wanted to start with this raga, which neither Gyan nor I had actually ever done with Terry, and transition into “Camargue” and instead of ending big we would bring it back down at the end. Got it. It’s an instrumental piece which was built around the harmonium he used in Arles, which was tuned to the key of Db. We had only played it that one time in Arles, so it was very fresh. “But let’s do it in the key of C instead of Db.” No problem.

Out we go onstage, I set up a drone in C, Gyan joined in and Terry began to sing. I don’t know if I was in some sort of perfect acoustic pocket, but from where I was standing on stage, with my 2 amps behind me softly droning in a wide stereo, Terry’s voice singing out in the house as well as in my monitor, the music, the actual frequencies in consonance, seemed to lock-in in a magical kind of way. Terry’s intonation seemed that it could get no closer to center. It was much like what the Arte Quartet described after their concert a few nights before—that the music seemed to resonate in a way that created it’s own momentum. When the pitches truly lock in, the sonority is almost like a living thing. All I could think of was that Terry really wanted to sing that particular raga at that particular time, and it sounded like it.

When concerts start well, they usually end well and the rest of the night was as gratifying as those first moments. Gyan and I did an acoustic set of duos in the middle of the concert, Terry’s Cantos Desiertos, and we closed with Ebony Horns, which begins and ends with a unison rhythmic motif in 19 beats.

A late dinner followed, of course, at a wonderful restaurant called Hosteria Toscana and I had one of those truly memorable dishes that immediately entered my personal food hall of fame. Called something like Casete de tagliolini con tartufo. This amazing dish was delicate and subtly seasoned and not at all overwhelming with truffle oil. Instead, the perfectly cooked tagliolini, now my favorite of all pastas, was tossed in butter and had paper-thin slices of raw or nearly raw fresh truffle which were nearly flavorless except for the most delicate rich aroma. It was served in a “box” of crisp, thinly sliced hard cheese, (either reggiano or something very similar,) and then baked, I think, into a crisp. Like a hand-made Italian version of a taco bowl. The aroma of the cheese, heated lightly by the buttered pasta, mixing with the delicate perfume of what must have been just a dash of truffle oil—the textures of that perfect pasta with the gentle crispness of the truffle shavings and the crunch and chew of the cheese—and an amazing chianti from the Tuscan hills. It was right up there with the perfect fish I got in Palermo several years ago which is currently occupying the number one slot in the hall of fame.

Goodbyes in the restaurant and then more goodbyes on the street, then most of us get into the van for the 45 min trip back to Bologna, piloted by Vittoria. Goodbyes again when we’re dropped off in the lobby of our hotel—the same one we’d been staying at all week, but a different room this time. Set the clock for 7am. The time now, 4:17.

The 23 hours that it took to get from the curb in front of the Hotel Palace in Bologna to our driveway in Nashville were an exercise in staying cheerful, aided by coffee, beer in the Frankfort airport, wine on the United flight, movies, cans of water (in a desperate and futile struggle against dehydration,) milk chocolate and witty repartee. It was a week to remember, but it was great to sleep in our own bed.

Thanks for hanging with me. I’d love to hear comments from anyone who cares to write. Stay and touch. Ciao!