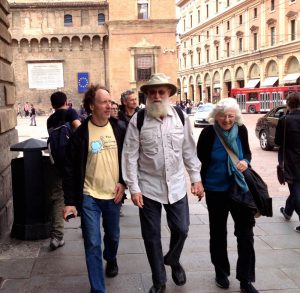 Sunday morning at 8:30, the director of the Angelica Festival, Massimo Simonini, met us at the hotel as we were finishing breakfast and took us to Real Sound rehearsal studios a few blocks away. Real Sound occupies a group of basement rooms, sound-proofed for rock bands. Our padded cell was equipped with a small PA system, drums, piano, etc., the walls covered in bright green and black out-gassing foam, essentially devoid of ventilation and flooded with green-hued fluorescent lighting. We got all the gear set up—they rented a Korg Triton for Terry into which he loaded his own sounds and tunings—and got to work reviewing pieces for the upcoming concerts. We have 2 completely different programs to prepare for concerts in Modena and Lugo on Thursday and Friday nights. Terry had only slept an hour or two due to the jet lag, but nevertheless we had a productive session.

It seems that you can’t walk more than a few yards without passing some sort of eating establishment and there is a very lovely restaurant right next door the hotel, so we had a lovely and rather extensive lunch there. Terry also has a solo pipe organ concert on Tuesday evening at a nearby church, so he was scheduled to go there in the afternoon to get acquainted with the organ, and I had a chance to practice Terry’s “Cantos Desiertos”, a set of 5 duos for acoustic violin and acoustic guitar which I’ll be playing with Gyan in Modena on Friday night. I recorded the pieces with David Tanenbaum for New Albion Records about 15 years ago as part of a larger set of pieces for guitar by Terry called The Book of Abbeyozzud. I don’t play the acoustic violin that frequently any more so at some point I finally took my bulky hotel mute out of my violin case, (it’s intended to practically silence the sound of the instrument,) and there was no way to play quietly, but what a pleasure it was to hear the violin ringing out in this old hotel room with the hard plaster walls and high ceiling, sounding louder than my electric with an amp, and I was reminded that this is exactly what these instruments were intended to sound like, designed and perfected several hundred years ago just a few miles away in Cremona. My apologies to the people in the room next door.

After a wonderful dinner at a nearby restaurant with Terry, Ann and Gyan, we set out to find the percussion concert happening that night as part of the Angelica Festival. But after wandering around in a light rain for a while and finally finding the performance space, we discovered the concert had just ended, so Terry and Ann went back to the hotel while Gyan, Stephanie and I shared a bottle of wine at a local bar and caught up a bit. Gyan and I have a long and fairly hilarious history together. Last time I saw him was in France in October with Terry, but when I first met Gyan he was just 20, still at San Francisco conservatory studying with David Tanenbaum. We’ve played together in some of the worst dives you can imagine in our rock band and in some of the greatest concert halls in the world touring in Italy, France, Germany, England and all around the US with Terry. Exactly one year ago he played 6-string banjo in the series of concerts I did in Nashville and at Carnegie Hall with the Nashville Symphony premiering the electric violin concerto, “The Palmian Chord Ryddle” which Terry wrote for me. We’ve traveled many miles and emptied many glasses together.