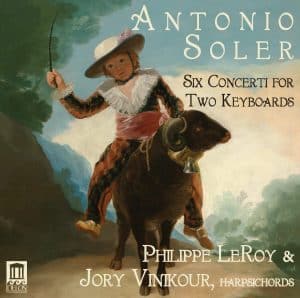 “In truth, a well-meaning inclination to proclaim every piece recovered from neglect a rediscovered masterpiece is no more beneficial than dismissing unheard music as deserving its obscurity, but one of the inscrutable marvels of art is the rare but potent ability of artists to perform a work or a whole repertory in a way that not only figuratively clears the cobwebs but also literally redefines the ways in which the music is interpreted, performed, presented, and received. This is what Maria Callas and Magda Olivero achieved in bel canto and verismo repertories, what Marie-Claire Alain did for her brother Jehan’s music for organ, and what Arthur Grumiaux did for Händel’s forgotten violin sonatas. This, too, is what internationally-acclaimed harpsichordists Philippe LeRoy and Jory Vinikour accomplish with this new Delos recording of the Six Concerti for Two Keyboards of Antoni Soler i Ramos. This music is not unknown, but hearing this disc, in the context of which producer and recording engineer David Bowles centers the music in an acoustical space of stunning, almost clinical clarity, may prompt the listener to believe that this is his first contact with these Concerti. A performance of music for harpsichord is expected to dazzle with virtuosity, and there is no shortage of nimbly-executed deluges of notes here, but the stylistic acuity and aesthetic sophistication are the attributes that mark this as a pioneering disc. The notes are but the tip of this musical iceberg: as played by LeRoy and Vinikour, the true merit of this music shimmers beneath the surface. … It seems wholly logical that, on some level, music is inherently Existential. As John Donne might have opined, neither any musician nor any piece of music is an island upon the shores of which no external influences intrude. Examined from any conceivable perspective, music is defined by collaborations, by the bonds that form and evolve among music, performers, and audiences. In essence, this disc is two uninhibitedly communicative artists’ earnestly personal solution for one of music’s great, Sartre-esque enigmas. In this music and in their awe-inspiring arsenals of musical skills, Philippe LeRoy and Jory Vinikour are equals. Could he hear this recording of his Six Concerti for Two Keyboards, Padre Soler would surely also welcome them as equals with the pious altruism for which his contemporaries praised him.” —Joseph Newsome, Voix des Arts