Whenever Valentine’s Day approaches, we turn to one of the Delos Evergreens and all-time favorites, Arleen Auger‘s famous “Love Songs.” America’s great lyric soprano made nearly two hundred recordings in her remarkable career, but this disc of love songs from around the world was her own personal favorite. These are musical communications that linger in the memory and in the heart, from the very first words of Copland’s Pastorale:

“Since you love me and I love you,
The rest matters not…” 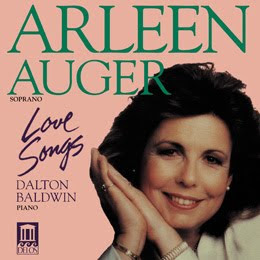 “Truly incomparable singing… There is something beautiful for everyone in ‘Love Songs.'” Stereo Review

“Romance is the unifying theme, and Auger is a seductive interpreter.” Billboard

“This extraordinarily wide-ranging recital is a delight from the first song to the last… this cannot be too strongly recommended.” —Penguin Guide to Compact Discs

“Listening to a song recorded by Arleen Auger, one might be inclined to credit the engineers for some of the apparent perfection. That any singer should be able to sustain such effortless lines, such pure and exquisitely gauged sound, so consistently, seems unbelievable. Believe it.” Los Angeles Times

“The extraordinary Arleen Auger,” as The Times of London called the American soprano, was an icon around the world, revered for the luminous quality of her voice and her superb musicianship. Stereo Review summed up Auger’s singing as “an artistry that affords us a real glimpse of what we thought was a lost art.”

And Stereophile wrote, when the disc was first released: “Musically speaking, Arleen Auger has to be one of this nation’s most meritorious natural resources.” We can be grateful that Arleen’s beautiful singing was captured so sensitively by recording guru John Eargle, who was Delos’s Director of Recording for many years.

Amelia wrote about those memorable “Love Songs” sessions:
“Arleen made close to 200 recordings in her too-short lifetime, but the all-time around-the-world favorite among them was ‘Love Songs,’ which she recorded for us, together with Dalton Baldwin, in the lovely chapel of the First Congregational Church in Los Angeles. After recording all of the repertoire they had prepared, Arleen and Dalton decided on the spur of the moment, just for fun, to do a couple of takes of ‘Before I Gaze at You Again’ from ‘Camelot.’ Magic! It turned out to be one of the favorite Love Songs tracks.

“Arleen’s untimely death in 1993 left a number of eagerly-awaited projects undone, among them our planned Love Songs, Vol. 2. But the superb collection on this disc has the distinction of being Arleen’s personal favorite among her many recordings. She recorded two other highly-prized albums for Delos: Great Arias of Bach and Handel with Gerard Schwarz and the Mostly Mozart Orchestra (DE 3026); and the Villa-Lobos Bachianas Brasileiras No. 5 with the Yale Cellos (DE 3042).”

It was in the same lovely chapel in Los Angeles that Sir Richard Rodney Bennett recorded his sentimental album “I Never Went Away.” And once again John Eargle was the engineer. As Londoners and New Yorkers know, Sir Richard loves to play – and sometimes sing — his exquisite arrangements of “standards,” among them his own songs, at cocktail time. He is known the world around for his classical compositions and major film scores, and was knighted for his “Service to Music.” But for a glimpse of his sentimental heart, as well as his special talent for sophisticated lounge music, try “I Never Went Away.” 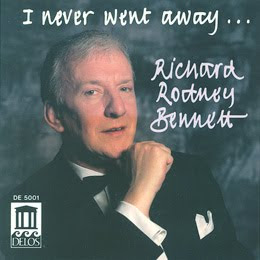 “Sophisticated jazz pianist and intimate vocal stylist…. This might presage a revival of this sort of urbane conversing o
ver a piano keyboard, yet who could do it so well?” The Times, London

“…rich harmonic resource and a fluent piano technique, both articulate and cultivated …the richness of his detail and his fluent inventiveness always perfectly attuned to the mood of each lyric. ” The Star, New Zealand

Sir Richard comments about the recording sessions for “I Never Went Away”:

“Listening to the radio as a child in the mid-to-late forties, I used to try to play any tune that caught my fancy. At that time I wasn’t aware that Gershwin, Porter and Arlen were Great American Songwriters, merely that their tunes were as necessary and desirable to me as toy trains and furry animals were to other children. I clearly remember forcing my mother to buy me the sheet music of Laura when I was ten…

“I made this album in a beautiful, quiet church in downtown Los Angeles in January, 1990. I just had a piano and microphones; there were no monitor speakers in the room with me, no flashing lights or sound-proofing equipment, and any electronic gadgetry was restricted to the control room. The sound I heard as I sang and played is the sound you hear now. While I was recording I was thinking — “but this is too simple and warm, surely there ought to be problems?” But there were none, and maybe this happiness comes over in the music.”

If you like French chansons, you’ll be interested in yet another Delos Evergreen in the romantic vein. This is the first album American lyric tenor Vinson Cole recorded for us. Vinson was discovered early in his career by none other than Herbert von Karajan, and has long been known to vocal enthusiasts as the tenor soloist in four celebrated Karajan recordings: Der Rosenkavalier, the Mozart Requiem, and the Beethoven Symphony No. 9 and Missa Solemnis. 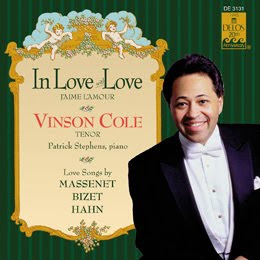 “Cole instantly captures attention with a pliant voice of striking clarity, a sweetly purling timbre entirely free of tonal impurities. The upper third of his range — that all-important area for a tenor who wants to sing a lot of opera — has an appealingly heady, open, and easy resonance…” New York Magazine

“a clear, noble voice…an aesthetic beauty, the timbre especially beautiful in his piano singing, which has a quality beyond comparison…” Der Tagesspiegel, Berlin